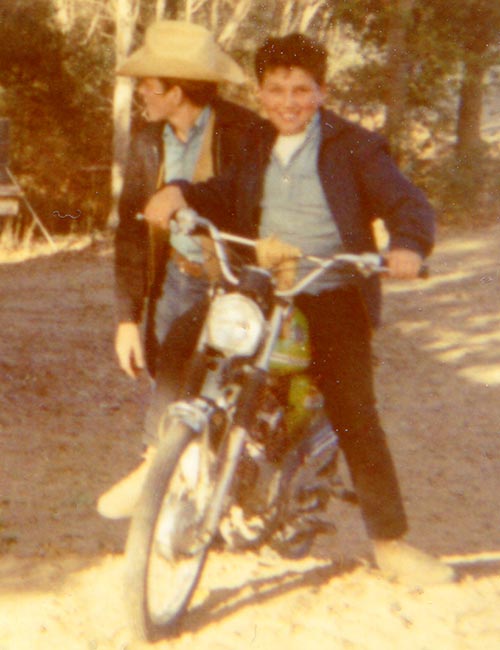 My workshop is home to my motorcycling world, so I go in every day, whether I need to or not.

Various years of different riding disciplines are parked there, surrounded by memories tacked to the walls. On the wall above the workbench, cut out from a motorcycle magazine, is an advertisement page that states, “Get that first ride feeling all over again.”

Motorcyclists usually can recall that first ride moment. For me, it was 1969, when a childhood friend offered to show me how to operate his Suzuki 90 trail bike. Billy Waltrip was about 5 years younger than I, but wiser than his age. He spent his summer days at his grandparents’ farm in Salinas, Calif. I had a summer job at a horse ranch next to them, where I’d see Billy riding his trail bike around the dirt roads.

For almost a year, Billy would generously share his bike with me. Before I was old enough to drive the family truck to the farm, I’d ride my bicycle 10 miles on school-year weekends just to ride Billy’s trail bike.

That first ride was thrilling. There were sounds and smells of machinery I would come to love. My mind was stimulated by the mechanical workings I had control over.

We’d also ride double, exploring the Salinas River trails, and map out a track on the farm roads to time each other’s laps. Sitting and looking at motorcycle magazines covering the growing sport, we’d gawk at those yellow Suzuki works motocross bikes of Joel Robert and Roger DeCoster.

By September 1971, I had saved almost enough money to buy my first motorcycle. With a little extra cash help from my mother, I bought a Suzuki TS185 Enduro, which I would strip down and modify with what I learned from the magazines. Billy got a new 120 Enduro. Now he and I each had a ride, and I got that first ride feeling all over again.

At North Salinas High School, I made motorcycle friends. Fred had a Honda SL175 Enduro. Danny had a brand new Suzuki TS250 Enduro he rode to school. Manuel modified a Yamaha DT-1 into a short track racer, which sparked my interest in racing.

After graduation in 1972, I enlisted in the Navy. Stationed in San Diego, I realized how close I was to the then-famous Carlsbad Raceway, home of the United States Grand Prix of Motocross.

Motocross was exploding in Southern California. I bought a 1973 yellow Suzuki TM250 and raced my first amateur motocross at Carlsbad. It was that first ride feeling all over again.

By 1975, I had one of the new Husqvarna CR 250 GP race bikes. The explosive power and lay down shocks provided that feeling again.
Honorably discharged from the Navy in 1976, I never left San Diego to go back to Salinas.

Southern California was where motocross racing, desert riding, dual sport trail riding and year-round street riding presented so much opportunity and so many experiences.

I’ve been fortunate to meet, compete and just ride for fun with some of motorcycling’s legends. And, since 1999, I’ve raced vintage motocross, where I get to relive those early years on bikes I’ve restored.

Distance and time separated Billy and me until 1997. I took a 5,000-mile trip around the western United States on my BMW R100GS and stopped in Salinas to reconnect with him.

We shared the evening over a steak dinner and bench racing. I made a point of thanking him for introducing me to a lifetime passion of motorcycling. I’m glad I did. That would be the last time I saw him.

Billy passed away in September 2019 at 59. He was one of the most generous individuals I have known. Now, as I await my gate drops, I dedicate each race and that first ride feeling to Billy.