‘I Want To Tell You About A New Picture …’ 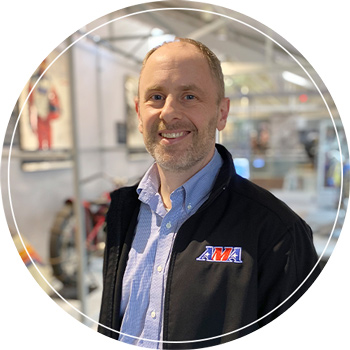 Do these two things, and you will grow: get more, keep more.

The motorcycle industry designed the AMA in 1924 with that second job in mind. The AMA would give riders more stuff to do on motorcycles. As a result, those riders would buy more bikes and parts. They would renew as members. Motorcycling would grow.

The first few years, the AMA was a department of the industry group, the Motorcycle & Allied Trades Association (the predecessor of the Motorcycle Industry Council). But, as Arthur Davidson of Harley-Davidson Motor Co., wrote to a fellow M&ATA board member on Oct. 29, 1928, “the AMA never got very far because it was somewhat like a stepchild. About all it could do was to partly regulate competition. …”

That changed at the next M&ATA board meeting when the AMA was voted into independence, with its own board and a clearer mission.

“I want to tell you about a new picture,” Davidson wrote in his letter. “To put over this AMA program, which will be a big help in selling motorcycles, Mr. E.C. Smith of Columbus, Ohio, is going to put in his full time promoting rider activities, regulating competition and in general working with the riders on their problems.”

A.B. Coffman, AMA secretary before Smith took the reins, shared more details of the reorganization plan in a letter to M&ATA President James A. Wright, of the New York Mica & Mfg. Co. The retooled AMA would “further the sport of motorcycling, control competition, protect the riders’ interests, organize clubs [and] promote interesting activities for the riders,” because “it is almost as essential to keep a rider interested … as it is to make a new rider.”

In marketing terms, the AMA would become an engagement tool.

Today, we have an opportunity to create a new picture and enhance how the AMA engages motorcyclists through non-competition activity. The new Member Activity Department will do that work.

“The recreational riding community represents the greatest number of motorcyclists, by far, in our country, and the Member Activity Department will provide increased focus for serving their needs,” AMA President and CEO Rob Dingman said when he announced the department.

The department also will interface with dealers and organize AMA Recreational Riding Commissions, which advise AMA staff members on how the association can support AMA-sanctioned recreational activity.

All of these programs are meant to “keep a rider interested” in using his or her machine. An interested rider will buy another bike, renew a membership, and promote motorcycling and the AMA.

Heather Wilson, most recently recreational riding manager, has been promoted to director of member activity to manage these tasks. Heather is a lifelong rider, a certified motorcycle safety trainer, personally active in club activities and the consummate professional. She reports to me.

Keep an eye on americanmotorcyclist.com for ways you can help Heather “put over this AMA program,” grow membership and keep riders riding.

The Member Activity Department is just one recent change Rob has made to improve how we serve our members.
The new Operations Department is responsible for information technology, facilities management, museum administration and coordination of vendor relations. Steve Austin is our director of operations. Steve has owned about 70 motorcycles and has extensive operations experience, including a military career as a combat engineer. On the job only a few months, Steve already has introduced efficiencies to save your association a fair amount of money. Please visit the AMA Motorcycle Hall of Fame soon to appreciate the work Steve and his team have put into the facility.

We also have improved the capabilities of the Communications Department, hiring longtime motorcycle journalist Matthew Miles as director of communications. You likely know Matthew’s work. With nearly 30 years of reporting and editing for Cycle World magazine, he brings an abundance of experience and respect to his role. He is responsible for the planning and execution of all AMA communications.

As members and staff, we all can further the AMA mission to promote the motorcycle lifestyle and protect the future of motorcycling. We welcome your input. Email us at memberservices@ama-cycle.org, and let’s discuss ways we can encourage riders to ride more.

James Holter is the chief operating officer of the AMA.