Motorcyclists know: It’s all about the joy of riding.

Whether it’s a cross-country tour astride a large-displacement touring bike, a blast through closed-course curves on a track bike, a day of motocross competition or a leisurely trail ride, the fun comes from twisting the throttle and just going.

But sometimes translating that feeling into words can be difficult.

Where does the motorcycling community find new riders?

What do you tell people who are curious about motorcycling, but have never ridden?

AMA Motorcycle Hall of Famers Scot Harden and Ricky Carmichael have helped thousands of people get started in motorcycling and improve their riding skills. And Maggie McNally-Bradshaw, the former chair of the AMA Board of Directors, is a Motorcycle Safety Foundation instructor, who has taught hundreds of people in formal classes, but who also helps people get started in a more casual setting.

We sought their expertise. And found three very different stories. 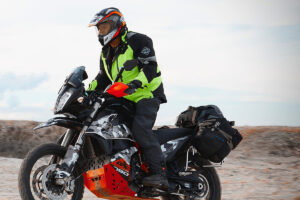 ▲ Scot Harden has contested, and even won, many of the toughest off-road competitions in the world. The AMA Motorcycle Hall of Famer’s “Plus 1 Rider” program emerged from his own experiences teaching sons Brent and Brock, among others, to ride motorcycles. More recently, Harden has turned his two-wheel attention to 3-year-old grandson Jensen.
Photo provided by Scot Harden

It starts at home

AMA Motorcycle Hall of Famer Scot Harden, of Harden Off-Road Inc., has helped more than 3,000 people get started in motorcycling over the years, running training schools in the 1980s, teaching adventure riding during his years at KTM and generally encouraging everyone who voiced an interest.

In 2018, Harden launched his Plus 1 Rider Initiative “to remind everyone that the most effective advocates for bringing new riders into our sport are existing riders.” He encouraged every motorcyclist to convince one person to give riding a try.

This year, Harden’s attention is on at least one potential rider very close to home, the next generation of Hardens: his 3-year-old grandson, Jensen.

“At its foundation, the Plus 1 Rider premise starts at home, with your own family,” Harden said. “No need to look any further than your sons, daughters, grandsons, granddaughters, nieces, nephews and assorted family members to secure the next round of future motorcycle prospects. Why pass up an excellent opportunity to bring your own family along for the ride? 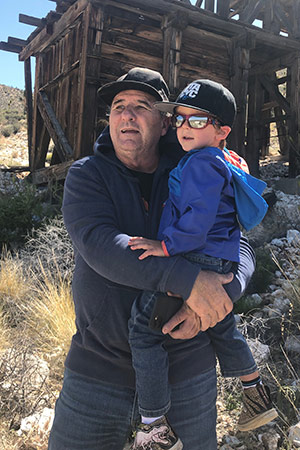 “I never overlooked this fact and am proud to say both my sons, Brent and Brock, are not only avid motorcycle riders but also have careers inside the motorcycle industry.”

Both of Harden’s sons raced professionally in off-road and motocross, but now ride just for recreation, “occasionally even with the old man.”

Harden also taught his nephews and nieces about riding when they paid visits to his house, teaching them to ride the Yamaha TT-R125 owned by his wife, Kristi.

“To see the enthusiasm and joy they get from learning how to ride, to operate the throttle and clutch, to shift, feel the acceleration, sense of freedom and control is a beautiful thing to witness,” Harden said.

And then there is Jensen.

“Another great gift has been watching my 3-year-old grandson come along on his journey as a new rider, watch him take his first tentative steps into a two-wheel motorized world and to share some of the truly great experiences it all provides,” he said. “Jensen has been riding since he was 2 years old, starting on his new Stacyc.”

Jensen’s uncle, Brock, was one of the original employees of Stacyc, an electric minibike company, and developed the company’s youth demo program. And Jensen’s father, Brent, was Answer Racing’s brand manager for the past five years.

“Not only did he have one of the coolest new kids’ motorcycles to come along in quite a while,” Harden said, “he also had all the protective gear he could ever need.” 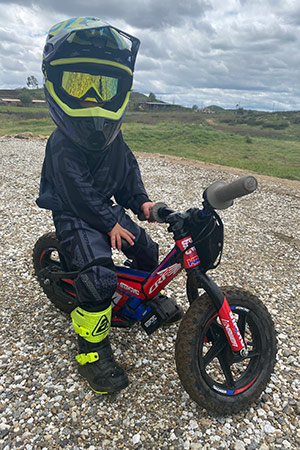 The rewards of introducing someone to motorcycling are many. But teaching a youngster is special—even more so when the youngster is such a close relative.

“Watching Jensen develop as a rider has been one of the most gratifying experiences of my life,” said Harden, a three-time International Six Days Enduro medalist, five-time Baja 500/1000 Overall Motorcycle champion and a Dakar Rally finisher. “His unbridled joy and excitement for the act of riding with his dad and his papa taps into a part of my soul that few other things can reach.”

Harden took Jensen riding and camping in the Mojave Preserve over Memorial Day Weekend, setting up a short course around their motorhome.

“He spent the better part of two days pounding laps, doing doughnuts and burnouts, and, if you don’t believe me, ask him. He’ll tell you so,” Harden said. “He has developed quite a vocabulary, all based around riding his motorcycle. And notice I didn’t say minibike; he won’t let you call it that.”

Harden also took his grandson on his KTM 790 Adventure R on adventure rides to an old mine and homestead sites sprinkled through the Ivanpah Range.

“We searched for gold with metal detectors, explored old mining cabins and vehicles, took hikes in the surrounding desert,” he said. “All this was possible because of our shared love of motorcycling. You can see the positive impact it is having on his development, even at just 3 years old. Better yet, he has a little brother named Layton, who is just a year or so away from riding himself.”

Harden said his Plus 1 Rider Initiative is about encouraging existing riders to become better advocates for motorcycling, “but never forget that charity begins at home. Start there. The rewards are, well, countless.” 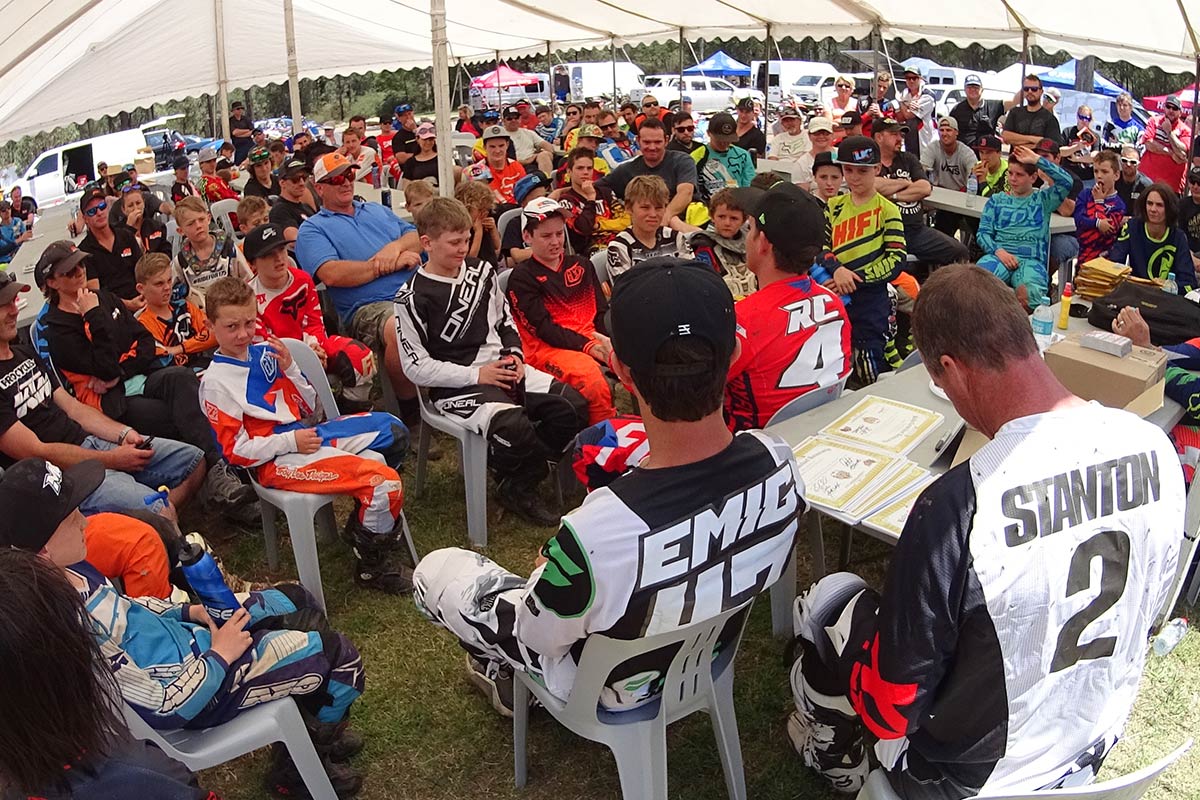 Getting tips from the “GOAT”

In the early years of the new century, AMA Motorcycle Hall of Famer Ricky Carmichael—known as the “GOAT,” or the Greatest of All Time—wanted to benefit the motocross community by offering riders a chance to learn from him and other racing greats.

Ricky Carmichael University and the Carmichael Farm Camps give riders who have some experience the chance to improve their skills by learning directly from some of the best in the business.

“Why does everyone get involved in motorcycling? Because it’s fun,” said JH Leale, president of Ricky Carmichael Racing. “If you can do what you love and get better at it, it’s going to be even more fun.”

The Ricky Carmichael University events bring a maximum of 100 participants together. Riders rotate among instructors, each of whom provides the students with deep knowledge and expert techniques on a single aspect of the ride.

More than 2,000 riders have been through the Carmichael programs.

The idea for RCU emerged from a meeting at a motocross race. Carmichael and Leale talked with MX Sports Event Director Tim Cotter about hosting a training event after the Ricky Carmichael Supercross at Daytona International Speedway.

“Ricky was in a great place to have the time to do them, and he had the desire to give back to the motocross community,” Leale said. “The first one was in 2010 at Daytona, and our first overseas was in 2012 in Doncaster, United Kingdom. Since then, we have held RCUs on four continents and in six countries—the UK, Sweden, Belgium, Japan, Australia and the US.

“In the U.S., we have done them at some of the most iconic tracks in the country: Daytona, Muddy Creek, Lake Elsinore and at RC’s personal track, the Goat Farm.”

Leale refers to the combination of instructors and curriculum as “serious learning.”

But that serious learning translates into a more confident rider, who is more relaxed on the bike and has more fun.

“We get the full range of riders among all ages and ability levels,” Leale said. “Some are top riders trying to make it to that next level. Some are vet and former racers trying just become better safer riders.

“And that’s our motto: If we can help teach you how to be a better rider, your ability—regardless of what level you were—will improve, and you will get faster, but safer, at the same time.” 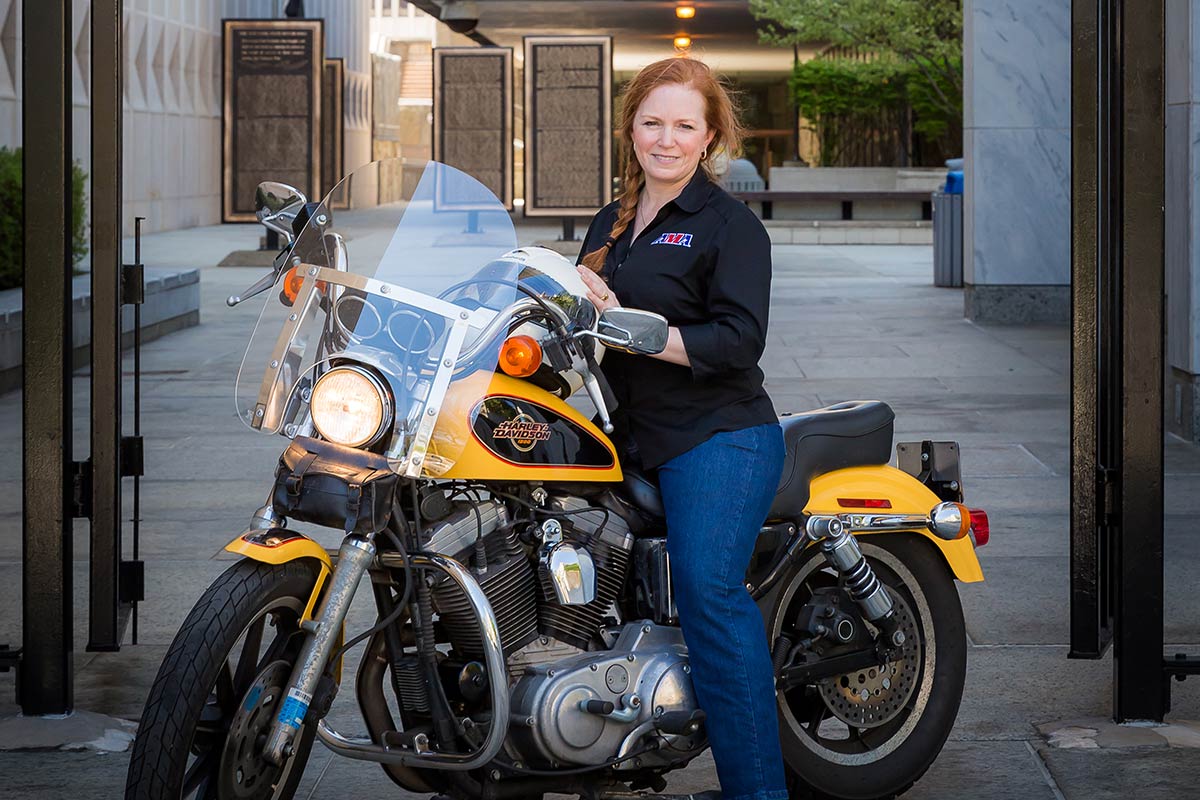 ▲ Maggie McNally-Bradshaw, former chair of the AMA Board of Directors, poses with her Harley-Davidson Sportster. “I am always ready to promote motorcycling,” she said.
Photo by Joe Grant Photography

Motorcycling played a key role in the friendship of three women from the Albany, N.Y., area, giving them a fun family activity and, at the same time, an escape from the daily routine.

Maggie McNally-Bradshaw, Theresa Kearsing and Shari Greenleaf remain friends to this day, even though Kearsing and Greenleaf have paused their riding for a time.

McNally-Bradshaw encouraged her friend to ride with her, talking about riding and the joy of being on two wheels.

“When Maggie and I were about 18 and 20, we were walking down Madison Avenue [in Albany] one night, talking about riding, and I didn’t get how the controls worked,” Kearsing said. “So, as we’re walking, she’s showing me how it’s done—lifting her leg up and [sticking her] arms out and wiggling her foot. And I’m trying to copy her, still not really sure what she was talking about. But we were laughing and walking and talking about riding. It was great.”

Eventually, the pair took their motorcycle training class together.

They joined the Women on Wheels motorcycle club and found a supportive environment, where they met likeminded people and enjoyed group rides and events.

“The Women on Wheels chapter got a call one time from a woman who said she was interested in learning to ride,” McNally-Bradshaw said. “So, my ex-husband and I spent the afternoon with her in a parking lot, showing her how motorcycles worked.”
That woman was Greenleaf.

“But I really wanted to do this motorcycle thing.”

The three became close friends, sometimes taking “hooky days” off work just to get out on the road and ride.

“It was just one of those days that will stick with us forever,” she said. “You can’t plan them. They just happen.”

The women’s families “grew up together,” with McNally-Bradshaw adding a sidecar to her bike, so she could haul the kids along. The families went camping together. The bonds grew strong.

“It was wonderful,” Greenleaf said. “It was a warm and nurturing environment. I wouldn’t have done all that on my own.”

McNally-Bradshaw became and MSF-certified motorcycle instructor in 2007, so “the parking lot lessens stopped.”

But her passion for riding and for helping others ride continued to grow.

“There are lots of wonderful people out there who love to come up and talk about motorcycles or ask if their kids can sit on my motorcycle,” McNally-Bradshaw said. “And I am always ready to promote motorcycling.

“I have frequently offered to help new graduate [passed the class] riders when they decide to shop for a bike or gear,” she said. “And I invite them to let me know if they would like a riding buddy to get those first scary rides done—no judgement, just as a mentor and fellow rider. I haven’t had many takers, but it’s out there.”

McNally-Bradshaw even bought a used Yamaha TW200 about six years ago “to have on hand for those novice riders to get some seat time.”

“Recently, I have been chiming in on social media, primarily to the woman’s groups, providing short-girl advice and practice tips and sharing that I can be contacted directly with questions, bike/gear tips, or to get out riding,” she said.

Greenleaf describes it this way: “It goes beyond teaching someone how to ride. It’s also instilling in them the love for riding and involving them in the culture of it.”