Riding for a cause

Fall Journey To Highlight Use Of Public Lands

EDITOR’S NOTE: After the September issue of American Motorcyclist went to press, AMA member Rick May—a senior national adviser on recreation at the U.S. Department of Interior—canceled the planned 4,000-mile adventure ride with his 31-year-old son, Hunter, due to work obligations.

AMA member Rick May is embarking on a 4,000-mile adventure ride with his 31-year-old son, Hunter, in mid-September to highlight and encourage the use of motorcycles for responsible recreation on the nation’s public lands.

May is a senior national adviser on recreation at the U.S. Department of Interior. So the journey is connected to his job, even though he is spending no federal funds on the trip.

Although the route had not been established at press time, May said he plans to start at the U.S.-Canada border in Idaho, probably in the town of Porthill.

Making their way southward, the Mays will travel on trails and roads across public lands and make side trips to visit several national parks. Rick May said he will meet with park superintendents, as well.

“We’ve seen a 300 percent increase in the use of trails across the country,” May said. “My idea was to take this trip to call attention to the trails and make sure they are cared for properly.

“Adventure riding is a great way to do this, because it is for everyone who is capable of riding a motorcycle—old, young, whatever. Motorcycling includes everybody.”

May hopes to meet people along the trails and talk about riding, trail maintenance and other issues. And he wants riders to travel with Hunter and him for an hour, a day or longer, if they like.

May will be blogging about the trip on the Interior Department website (doi.gov), posting his first entry when he loads his motorcycle into a trailer and leaves his San Diego home for the Idaho starting point.

His interest in motorcycling began when May was a child, and he spent much of his life racing motorcycles. He recently bought a supermoto bike that he is anxious to get some time on. 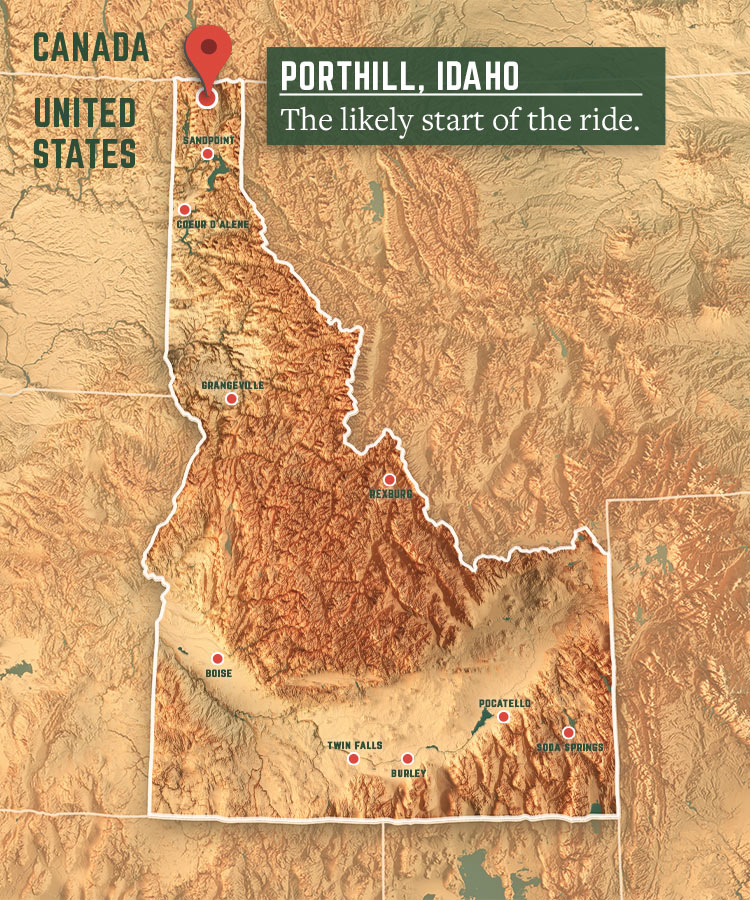 As a bicyclist, May has ridden the Continental Divide five times.

“When someone asked me why I rode the Divide so many times, I said, ‘It’s the only time I live or die by my own decisions.’”

A former Navy Seal, May enjoys roughing it in the outdoors and plans to camp for much of the trip.

On one camping trip, May was sleeping in a bivy sack when he was awakened by the smell of carrion. He opened his eyes to spot a grizzly bear poised above him.

And yell he did.

“The bear fell backward down an embankment,” he said. “Then, I could hear it running off through the brush. I can’t get experiences like that staying home.”

May’s responsibilities at the Interior Department include all recreation on public lands across the country—mountain climbing, hiking, horseback riding, bicycling, scuba diving, snorkeling and more.

“Everyone has the right to use public lands. But it is hard to explain to people who have never been on a bike.”

Weather will play a large role in determining the final route for the trip.

But May said the journey will end somewhere along the Mexico border, perhaps in New Mexico or farther west.

“I’m excited about seeing the land in a unique way from the saddle of a motorcycle,” he said.

▲ Rick May, senior national adviser on recreation at the U.S. Department of Interior, is preparing for a 4,000-mile ride to promote responsible motorized recreation on public lands.
Photo by Karen Cox