In 60 Years Of Riding, Roy Dyckman’s Done It All 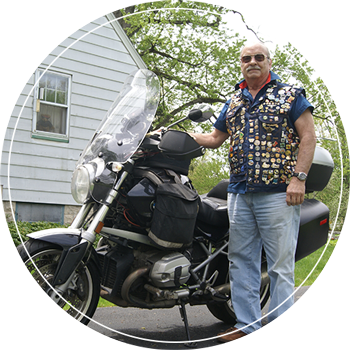 AMA Life Member Roy Dyckman discovered the fun of motorcycling through a childhood backyard project. Sixty years and more than 800,000 miles later, there are few aspects of the motorcycling lifestyle Dyckman hasn’t experienced.

While touring and long-distance riding are his specialties, the Canfield, Ohio, resident and BMW Motorcycle Owners Association ambassador has competed in three types of motorcycle racing, attended dozens of rallies throughout the nation and has been the touring and travel reporter for iHeart Media’s Two Wheel Power Hour Motorcycle Show for more than 20 years.

And through all those years and his myriad experiences, Dyckman has notched his accomplishments on a denim vest, a lasting tribute to a life on two wheels.

Dyckman recently donated a denim vest covered in hundreds of rally, event and AMA membership pins to the AMA Motorcycle Hall of Fame.

The vest bears a Blue Knights Motorcycle Club emblem, and Dyckman said he bought the vest about the time he became a life member of the law enforcement motorcycle club in the late 1970s.

He started putting pins on the vest from the rallies and places he visited on his motorcycle and wore it at Blue Knights club events until it got too heavy and cumbersome to wear. He continued to add pins from his trips, eventually running out of room..

Dyckman said of the many pins on the vest he got at places far from home, the ones from Alaska and West Coast motorcycle rallies mean the most to him.

Dyckman started riding in 1957, and his first motorcycle was a scooter he built.

“I hooked up a 6-volt battery and a starter motor to the back wheel of a scooter that was made for you to push around,” Dyckman said. “The power was either on or off. It was put together out of pieces and parts I could afford. I had a paper route back then that didn’t make a lot of money, but that’s what I did with some of it.”

He later upgraded his scooter’s power source to a lawn mower engine with a centrifugal mercury clutch.

After enjoying his backyard experiments, Dyckman’s next two-wheel rides were more traditional: a 1.8-horsepower Sears Allstate, followed by a Cushman scooter.

“Boy, I thought that was a real motorcycle,” Dyckman said of the Cushman. “It had a fat rear tire; the handlebars were pretty wide apart; and it was big and heavy.”

Dyckman held onto the Cushman for several years and gave a Harley-Davidson XLCH a try.

But the big Harley was difficult to kickstart. So, he sold it in 1967 to get a new Triumph Bonneville Land Speed Edition.

His father put some miles on the Triumph while Dyckman was serving in the U.S. Marine Corps. Dyckman said his four years of service in the Marines—which started in 1964 and ended in late 1968—included a 12-month tour in Vietnam in 1968 and a stint in the president’s guard at Camp David in 1966 and 1967.

Unfortunately, that was one of the few times Dyckman got to ride with his father, who passed away about two weeks later.

Dyckman kept the Triumph into the 1970s, when a friend who rode BMW motorcycles convinced him to give long-distance riding a try. Dyckman replaced the Triumph with a 1976 BMW R 90/6 that sits in Dyckman’s garage to this day—with about 326,000 miles on the odometer.

In the late 1970s, Dyckman went on his first motorcycle tour: a ride to a BMW Motorcycle Owners Association national rally at Loretta Lynn’s Ranch in Hurricane Mills, Tenn.

Though he had other motorcycles, Dyckman said, he still mostly rode the R 90 to the rallies, groups rides and races he attended on weekends during peak riding season for 20 years.

In addition to using his paid time off during his 42 years working for General Electric plants in Youngstown, and Warren, Ohio, Dyckman took advantage of the regular plant shutdowns for maintenance to get more riding in. He also worked mostly second shift and third shift and used the odd work hours to get a head start on some of his trips to rallies and races.

Dyckman kept the R 1100 GS until 2012, when a BMW motorcycle dealership employee in Florida bargained hard to get his hands on the GS while Dyckman was on his way to Daytona Bike Week. He rode the GS to Florida, but returned to Ohio on a new BMW R 1200 R.

“That wasn’t the best thing to do,” Dyckman said of the trade. “[I realized] I had to ride that thing back to Ohio from Daytona without a windshield and with a stock seat. But the stock seat was pretty comfortable.”

Dyckman estimated he has put 60,000 miles on the 2012 model. He also owned a Harley-Davidson Sportster in the 1990s for a short time, and estimates he’s owned about 12 motorcycles during his lifetime.

“I bought [each of] them for a purpose and rode the wheels off of them,” he said.

In addition to his road-riding adventures, Dyckman has tried his hand at three racing disciplines. His first foray into two-wheel racing was a flat track race at the short track at Deerfield Speedway in Deerfield, Ohio, aboard a Bultaco in the 1960s.

He also raced the half-mile track at the Carroll County Fairgrounds in Carrollton, Ohio.

In the late 1970s, Dyckman took up hillclimb competition. For about two years, he competed aboard the 1976 Honda XL350 that is now parked on his back porch.

In the 1980s and 1990s, Dyckman got into road racing and track days. He took his ’76 R 90/6 and ’93 R 100 RT to track days and road races, many of them at Nelson Ledges Road Course in Garrettsville, Ohio, and Mid-Ohio Sports Car Course in Lexington, Ohio. He also made a trip to Canada for a track day at Shannonville Motorsports Park in Shannonville, Ontario.

In 2006 at age 62, Dyckman took the most memorable motorcycle ride of his life. After retiring from General Electric, Dyckman decided to tackle one of the longest motorcycle adventures you can take in North America.

He rode his R 1100 GS from Key West, Fla., to Prudhoe Bay, Alaska. The 39-day, 38,000-mile trip included a stop in Washington state to visit a classmate and motorcycle rallies in Colorado and Vermont on the way home to Canfield.

“I had ridden in all [48 lower] states, but hadn’t ridden in Alaska,” Dyckman said. “There was another guy who was going to go with me, but he backed out of it. I knew at the time I wasn’t getting any younger, so I needed to go or forget it.”

Dyckman made good time on the ride. He started by riding to Key West in early June, then stopped home in Canfield before heading northwest toward Prudhoe Bay.

Departing Canfield for the second leg of the trip on June 14, Dyckman arrived in Fairbanks, Alaska, on June 22. He then traveled north to Prudhoe Bay, and doesn’t recommend doing the 500-mile ride north from Fairbanks to Alaska’s northern coastline.

“Ride to the Arctic Circle, get your picture taken, then head home,” he said. “The road has rocks in it that are the size of your head, and it’s muddy in lots of spots. It’s not a very good road. The truckers use the ice road instead of the haul road I was on.

“I thought my gauges were going to break because of how much the vibration from riding on that road was making them flop around. When I got off the motorcycle, it felt like the ground was still shaking.”

He said the locals in Prudhoe Bay were shocked to see him with his Ohio-licensed motorcycle. He stayed the night in a small room in a motel made from trailers, then rode the same haul road back to Fairbanks the next day.

Dyckman planned the trip over a two-month period, and some of his plan didn’t pan out the way he expected.

“I’d ridden on all the Canadian provinces, but I didn’t get my time right riding through Canada,” he said. “I didn’t realize the speed limit is a lot lower in Canada than it is here [in the United States] and the roads are chip and tar. You just can’t make the time up there.”

He said the Canadian border guards laughed when he told them he was riding to Alaska and would only be in Canada for a day or two.

The trip to Alaska was news in Dyckman’s hometown newspaper, The Vindicator. A story about his trip was published in the Aug. 14, 2006, issue. 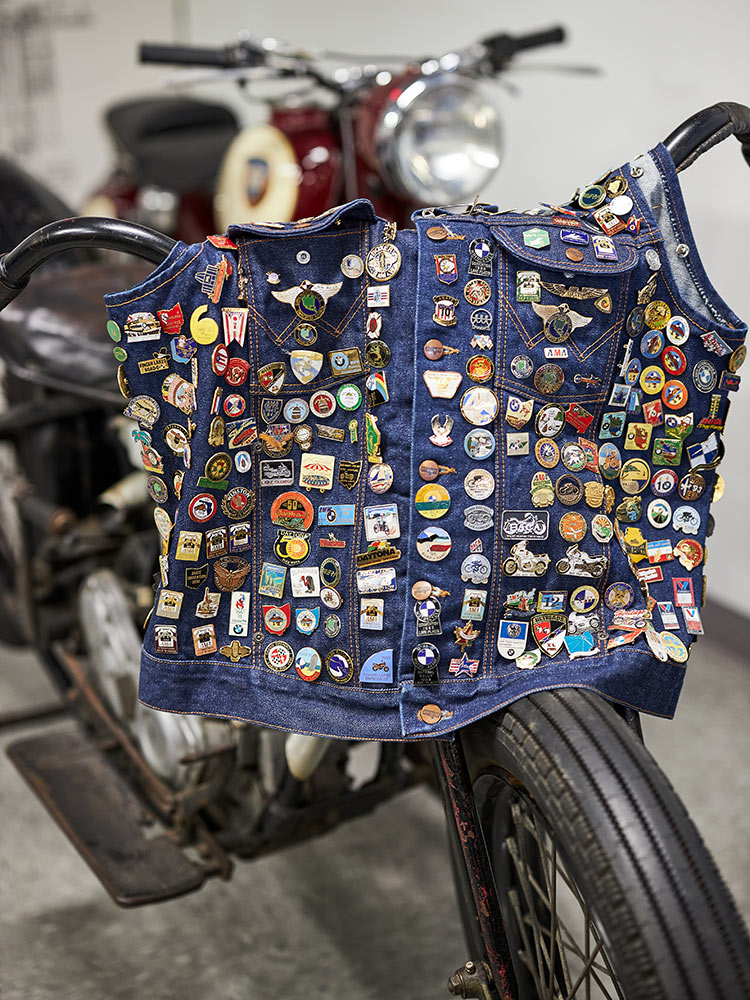 Dyckman has been sharing his stories and teaching listeners about motorcycle touring and travel through iHeart Media’s “Two Wheel Power Hour Motorcycle Show” for more than 20 years. The show is broadcast live on Youngstown’s 570 AM WKBN and on the iHeart Media app.

The show’s current host, Larry Ward, who also works for iHeart’s Youngstown family of radio stations, met Roy through a BMW MOA-chartered club in Warren, Ohio, and asked Roy to join the show as a regular contributor in 1999. With no prior media experience, Dyckman became the show’s touring and travel reporter.

He reports on his and Ward’s trips to rallies and races, offers motorcycle touring and maintenance advice, performs product reviews and discusses points of interest in northeastern Ohio and western Pennsylvania.

Ward became the show’s host in 2000, about a year after Dyckman joined the cast, and is grateful for how Dyckman’s segment has helped grow the show’s audience and helped attract new segments to the show’s weekly lineup.

“Roy has a lot of credibility within the motorcycling community,” Ward said. “I think the addition of Roy helped the show grow in its infancy.”

Ward has shared tens of thousands of miles with Dyckman, and noticed how Dyckman practices the touring tips he talks about on the radio. Ward also petitioned the BMW MOA to make Dyckman one of its ambassadors.

Dyckman was presented with his ambassadorship status live on the air during a show, much to his surprise and delight.

While 800,000 miles of road riding will create a lot of memories, a few stand out to Dyckman. Aside from his Alaska adventure, Dyckman said his most cherished motorcycling memories are earning his first Iron Butt Association pin—for which he rode from Canfield to Kansas—and earning his IBA BunBurner 1500 Gold, which requires riding 1,500 documented miles within 24 hours.

His decision to do a BunBurner Gold ride was motivated by his desire to attend a rally in Bend, Ore. Dyckman said he didn’t have a lot of paid time off to use, so he did the BunBurner Gold.

Dyckman also said he’s fond of his ride to the Grand Tetons and Yosemite National Park in the late 1980s, a coast-to-coast ride he took to California in the 1980s and his trips to Americade in Lake George, N.Y., the BMW rally in York, Pa., his annual rides to Daytona Bike Week and his visits to the Barber Vintage Motorsports Museum in Birmingham, Ala.

Dyckman has ridden motorcycles in seven decades, but said the 1990s were his favorite.
“The bikes were much more reliable in the ’90s,” Dyckman said. “They were fast and handled [well]. They’ve come a long way from when I started [riding].”

Dyckman’s advice for new riders is to get training. And emphasized that motorcycling is a life-long learning process.

“Take a class, learn from other skilled riders, and don’t ride in a group that’s way over your head,” he said. “Ride your own ride.” 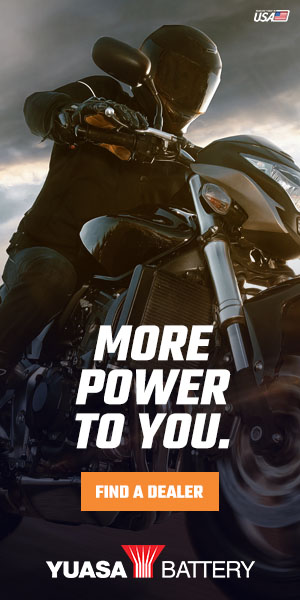 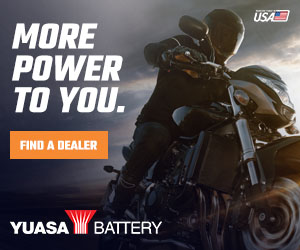