The Brit-Bike That Earl Bowlby Raced

You won’t find a longer unfaired race bike in the AMA Motorcycle Hall of Fame museum than the BSA that carried Earl Bowlby to national hillclimb fame.

When he retired from competition after the 1990 season, Bowlby had captured 10 AMA Hillclimb national championships, plus six Canadian titles. He was inducted to the AMA Motorcycle Hall of Fame in 1999.

Bowlby was an unlikely champion. In 1972, tasked with explaining the sport of hillclimb to Cycle magazine readers, journalist Frank Conner traveled to Bowlby’s home state of Ohio.

He reported that professional hillclimbers come in many shapes and sizes and range in age from early 20s to late 40s.

But Bowlby, wearing his traditional BSA windbreaker, stood out. One of his competitors described the seemingly low-key 37-year-old.

“He looks like a school teacher, but he rides like a maniac,” he said. “He never lets on what he’s thinking or how determined he really is, but he’ll try some stuff that nobody else will try, and somehow he gets away with it.” 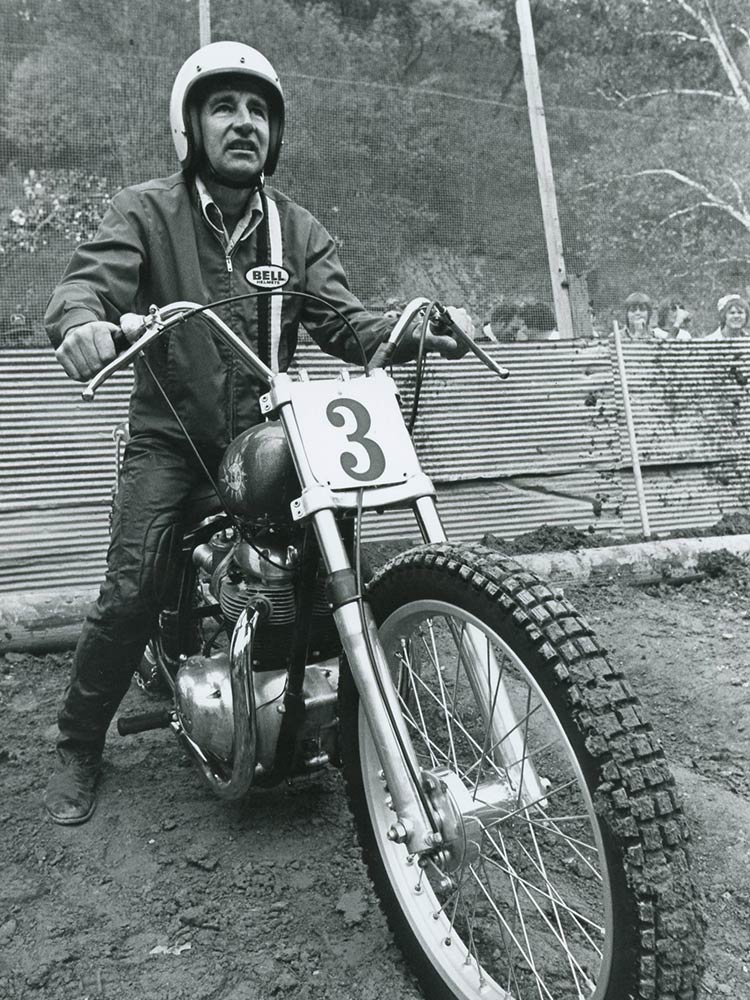 Photo from the AMA Archives

Bowlby’s nitromethane-burning A65 twin, with its punched-out cylinders and stroker crank, displaced 782cc. The bike developed around 150 horsepower and weighed about 250 pounds.

What appears to be an oversized hub is actually a front brake.

“Bowlby studies The Hill, grabs the clutch and punches the shift lever into gear. He revs the throttle with slow, steady motions of his wrist, building up a rhythm.

“The throttle hits the stop one last time, and he eases out the clutch for an unimpressive start. But the bike gains speed, and it thunders on a slanting course across the steep shale.

“Then, it reaches the ledges. The rear end lifts, starts to slide sideways—as so many of the other bikes have done this afternoon.

“The throttle pitch changes slightly, and the bike straightens up again, gaining speed on a straight course through the nightmarish ruts, finally disappearing ahead of billowing clouds of dust.

“The engine runs strong—and it keeps running long enough to reach the top of the hill. A moment later, the announcer reports, ‘The time: 8.72 seconds.’”

On that day—and so many others—no one was quicker up the hill than Earl Bowlby.