In the nineteen-teens, motorcycle racing, like motorcycling, was in its infancy, but that didn’t mean the machines or the men who rode them weren’t serious.

And one of the most serious companies about racing at that time was Harley-Davidson’s U.S. rival Indian Motocycle. Indian was dominating the dirt ovals and point-to-point races of the day because Harley’s production bikes were no match for the specially built race machines that Indian was fielding. Something new was needed.

That changed in the 1910s thanks to Harley-Davidson engineer Bill Ottoway, who designed a race-only version of the 1,000cc Model 10E that would become known as the pocket-valve racer. All non-essential parts were discarded, and a short, low loop chassis was built that allowed the rider to crouch low to cheat the wind.

Technically, those first pocket-valve engines were superseded in 1916, when the factory developed highly advanced eight-valve motors, with four overhead valves per cylinder, just like most modern Superbikes. But in actuality, the earlier bikes continued to run as a backup to the eight-valvers, which had early reliability issues.

This 1914 Harley-Davidson Factory Racer, on loan to the AMA Motorcycle Hall of Fame from Jeff Willis, is a full-on race-specific machine. This Model 11K sold for more than $1,500 in its day, more than three times the price of a car.

Perhaps as significant as the decision to build a true racebike, though, was the commitment to hire factory riders for a fully sponsored team. The move put Harley on par with Indian, which had been fielding its own race team for years.

One of the Harley team’s first official races was a 300-miler in Savannah, Ga., in November 1914. Indian won, Excelsior was second, and Harley was third. The following year, the Harley team started recording wins of its own, and a rivalry was born that endures today. 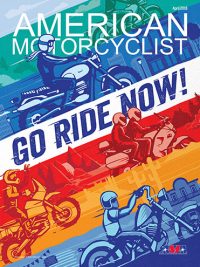