Long before AMA Supermoto, which features motocross bikes with modified suspension and road race tires (among other modifications), came the Superbikers.

Superbikers was a thrilling, once-a-year event held at legendary Carlsbad Raceway that starred the very best riders from motocross, dirt track and road racing. It rose to fame on ABC’s “Wide World of Sports,” which commissioned the event in 1979.

Much like modern Supermoto, the made-for-TV spectacle featured riders on motocross bikes competing on a mix of dirt and asphalt. The layout and surface mix was intended to level the playing field so stars from motocross, road racing and flat track could compete head to head.

In 1984, AMA Hall of Famer Kent Howerton, riding this motorcycle, beat the best riders in the world at Carlsbad. Howerton came out on top in an intense battle with two other future Hall of Famers: Yamaha’s Broc Glover and Rick Johnson.

The KX was heavily modified for the event beyond the obvious wheel swap. The engine was tuned for a faster top speed, while stopping power was enhanced by using the front brake of Kawasaki’s Z1 Superbike. The bike, like others competing in the event, also sat noticeably lower on revised suspension, improving stability.

The tuning worked, as the KX posted the fastest top speed of the event. And so did the brakes, considering Howerton was able to keep it under control and ultimately out-brake two of the greatest motocrossers of all time.

This bike is on loan to the AMA Motorcycle Hall of Fame from the Kawasaki Heritage Hall Collection. 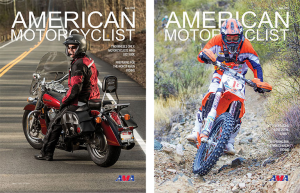