Is The Slingshot More Like A Car Or A Motorcycle? 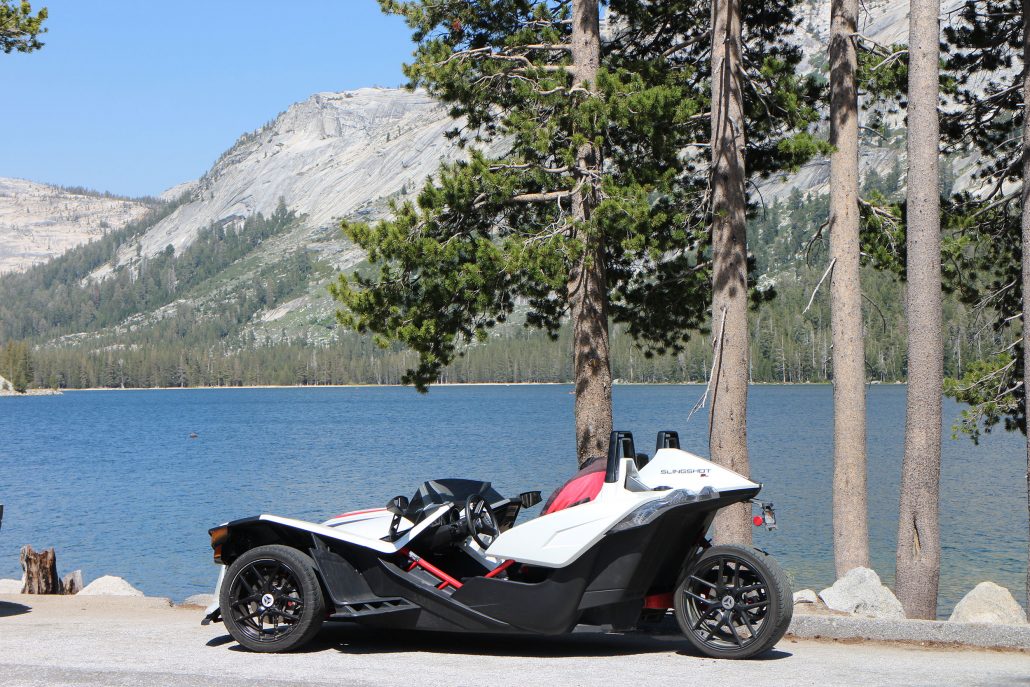 Tenaya Lake, at 8,150 feet, makes for a brisk but welcoming dip to cool off. F

This summer marked an anniversary for my riding partner, Patrick and me: The 19th summer in a row we had taken a motorcycle trip together.

Looking back at all the nooks, crannies and crevices of this great country we’d ridden across, I marveled. It had been a grand run.

Unfortunately, it appeared our run had ended abruptly. Patrick injured his shoulder, and sitting in the saddle for even a few hours proved agonizing. A weeklong journey seemed impossible.

However, ever resourceful, I began to broaden my definition of a “motorcycle” trip. Research turned up options, but were they really motorcycles?

The Can-Am Spyder looked promising. However, with its handlebars, it proved too “motorcycle” to accommodate Patrick’s injury. Various trikes proved unfeasible for similar reasons.

Then there was the Polaris Slingshot.

From the front, it looks like a Formula 1 car, with its twin wheels and two-seater cockpit. However, from the rear, its single-sided swing arm and single wheel was vexing.

Was this a car with motorcycling pretensions or a motorcycle fused to a car front end? Although I had no answer to that question, I realized I had found our vehicle.

Now we needed a route.

Heading up the Sierra Nevada mountains in June is an A+ adventure. With passes opening after their winter slumber, and summertime hordes of minivans not yet clogging the roads, it would make the ideal venue to answer our question: Is the Slingshot more like a motorcycle or a car?

The Slingshot is a two-seater, like many cars. However, so are many, if not most, motorcycles.

With few exceptions, motorcycles can carry a rider and pillion, while most cars can carry more than four passengers, easily.

However, the Slingshot’s side-by-side seating does resemble a car, although it was reminiscent of a side car rig.

Conclusion: Tie. The riding position sits too perfectly in between car and motorcycle to call.

The engine in the Slingshot is a General Motors Ecotec 2.4 liter inline four, found in cars like the Chevrolet Cavalier.

With 173 horsepower and 166 pound-feet of torque, power was fine.

While placing car engines in motorcycles is not unheard of (think of the Boss Hoss and its 350-cubic-inch V8), it remains a fairly rare situation.

Yet motorcycles with large engines are common enough to find. Indeed, the Triumph Rocket III, with its 2.3-liter engine, producing 148 horsepower and 163 pound-feet of torque is uncannily similar in specs to the Slingshot’s mill.

When it comes to the transmission, with a 5-speed manual, the vehicle tips slightly in favor of a motorcycle.

the Triumph Rocket III, with its 2.3-liter engine, producing 148 horsepower and 163 pound-feet of torque is uncannily similar in specs to the Slingshot’s mill.

When it comes to the transmission, with a 5-speed manual, the vehicle tips slightly in favor of a motorcycle.

While manual transmissions exist in productions cars, they make up the minority of cars manufactured today.

Conversely, despite the emergence of Honda’s promising DCT models, like the Africa Twin, the majority of motorcycles still employ manual shifting.

Conclusion: In this aspect, the drive train more closely resembles a motorcycle. 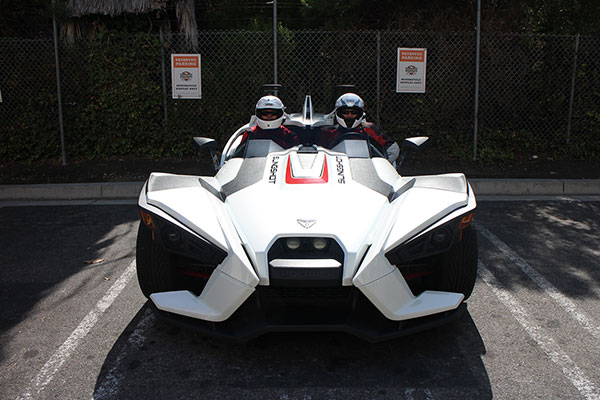 We’re on a mission from God…well—Dan Aykroyd and John Belushi we’re not.

This area of the vehicle reminds me of the old joke about the three blind men inspecting an elephant.

The first touches the trunk and proclaims the animal to be like an enormous serpent. The second runs his hands along its side and says it is a living mountain. The third grabs its tufted tail and proclaims it to be a small rodent.

However, the Can-Am Spyder employs a similar setup.

Taking a profile view is a stumper: While the traditional two-wheeled axle is up front, the rear single wheel is incongruous.

Staring from the back presents an unambiguous view of a traditional (albeit beefy) swing arm with belt drive.

However, one facet clearly pushes the vehicle to one side: It doesn’t pivot on its axis. With some exceptions (Yamaha’s new Niken being one), only single-track vehicles (motorcycles) have this feature. Dual- and three-track vehicles, such as the Slingshot, generate lateral G-forces, due to the fact they can’t lean into corners.

As an ATGATT adherent, this was a no-brainer—jacket, helmet, gloves. 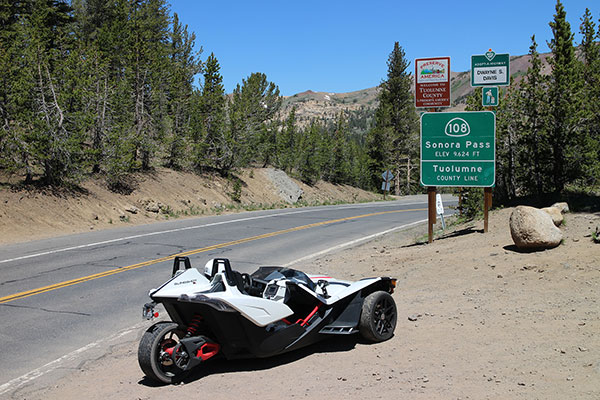 In California, helmets are mandatory with a Slingshot, linking it with motorcycles. However, riding gear wasn’t mandated past that. Wearing shorts, shirts and sandals would work, just like in a car.

As experienced motorcyclists, Patrick and I wore jackets, gloves and helmets.

Sitting low to the ground meant lots of rocks (and pieces of asphalt in construction zones) flew off vehicles’ tires ahead of us and into our face shields.

Helmet requirements vary by state, so if you’re in a Slingshot in a non-helmet state, you are not required to wear one.

Conclusion: Car appropriate clothing, while not our choice, is perfectly viable, giving a nod to the automotive side.

This is a very clear-cut situation: 45 of 50 states do not require a motorcycle endorsement on your license for driving a Slingshot. However, five states—Montana, Wisconsin, New York, Massachusetts and Maine—require it.

So, while the licensing branches of state governments seem to be in majority agreement, it raises the question: How can some states view it as a motorcycle, while most do not?

Many states have created a separate category—autocycles—for Slingshots and other three-wheeled vehicles with side-by-side seating and steering wheels. Depending on the state, an autocycle operator may or may not be required to have a motorcycle endorsement, complete a motorcycle-safety training course or wear a helmet.

Because the front of the vehicle is set up like a car, the engine lies under the hood, followed by the passenger cabin

Due to its motorcycle rear, there is no trunk. Thankfully, there is a storage locker well hidden behind each seat.

While cumbersome to access—you must fold the front seat down to open it—it does provide a nice security factor.Unless you know the lockers are there, you’d never notice them. Each locker holds a fully stuffed backpack—maximum. There’s a small glove box for incidentals.

In this sense, the Slingshot very much feels like a motorcycle. Limited, small, hard storage, with aftermarket soft storage, describes many a motorcycle.

When we pulled out of the driveway, the Jekyll/Hyde character of the Slingshot became noticeable.

As we sped down the highway toward the high desert, we were glad to have our Bluetooth headsets. In an open cockpit at 70 mph, even side by side, we had trouble conversing.

Except for the side-by-side seating, the Slingshot had a motorcycle feel with respect to the immediate environment.

Leaving the Mojave Desert and heading onto Caliente-Bodfish road, we encountered a unique dilemma. On a motorcycle, dodging obstacles, such as rocks, is fairly simple. Being a single-track vehicle, presenting a very narrow profile, a motorcycle can easily weave through a patch of rocks. In a car, you can usually, within reason, straddle small rocks without damaging the undercarriage.

On the Slingshot’s three-track setup, taking the car approach meant the back wheel inevitably took the hit, while trying to save the back tire from impact meant the front tires took the hit.

It was the worst of both worlds!

Patrick and I developed a “double swerve” approach to road debris, maneuvering the front end around debris, then quickly kicking the back end around to miss the obstacle. After a while, we became more proficient in this technique and actually enjoyed the skill and precision needed to avoid rocks.

While snaking through the narrower passes of the Sierras—such as the eastern section of Ebbetts Pass, which narrows to a one-lane section—the Slingshot’s 77.6 inch width was disconcerting.

However, we were quick to remember that it was this width that helped give the vehicle its “on-rails” handling.

In the end, the Slingshot manages to defy categorization.

It combines a bit of motorcycle and a bit of car, but a whole lot of neither, proving to be an exciting mixture, while still retaining a wholly unique flavor of its own.

Chris Phillips is an AMA member from Torrance, Calif.