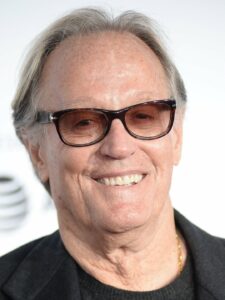 Peter Fonda, an AMA Motorcycle Hall of Famer and motorcycling enthusiast who provided positive exposure for the sport, died Friday, Aug. 16, in Los Angeles. He was 79.

Fonda, who was inducted into the AMA Motorcycle Hall of Fame in 2002, died from respiratory failure due to lung cancer.

He was born in New York City in February 1940. The son of actor Henry Fonda and younger brother of actress Jane Fonda, Peter studied acting at the University of Nebraska at Omaha. He then became a successful actor in his own right. Motorcycles and counterculture were common threads in some of his early work.

In 1969, Fonda produced and acted in the film “Easy Rider,” which made the motorcycle road trip famous. The movie featured Fonda as Wyatt and Dennis Hopper as Billy, two motorcyclists who decide to take a road trip from Los Angeles to New Orleans to attend Mardi Gras.

The film, written by Fonda, Hopper and Terry Southern, is regarded as an important film commentary of the era. It explored the conflict between freedom and societal standards in 1960s America. The film also helped to popularize the custom chopper movement and generated new interest in V-twin motorcycles.

Fonda’s career includes more than 100 titles as an actor, director or producer. He supported numerous motorcycle-related charity fundraising events, including the Love Ride and the Easy Ride for Autism.