Letter Of The Month: We Love You Too, Man!

Letter Of The Month: We Love You Too, Man!

Love being a part of this great family. It’s good to know someone has your back, and you have theirs. Thanks.

The Ride Gets Better 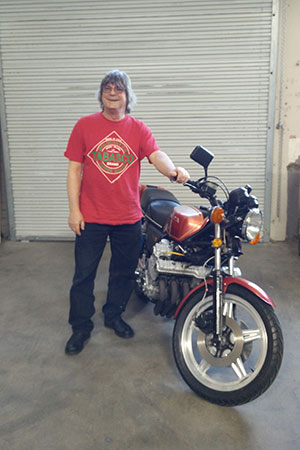 Thanks to Wayne Carpenter for his article in the May issue “Why I Love Riding: Aging Doesn’t Stop The Fun.”

I am 66 years of age and have been riding motorcycles since I got my California learner’s permit at 15-1/2. I learned how to ride on a Honda 305 Superhawk and I now ride my second ’79 Honda CBX, with a few Hondas in between.

I, too, enjoy riding more than ever as I have come to appreciate life and the beauty around me more as the years have passed by. There is nothing like the feeling I get each time I get on that beautiful six-cylinder masterpiece and go for a spin down Pacific Coast highway or the hills and mountains of Southern California.

Sadly, someday my riding days will be over. Until then, I will treasure each ride all the more.

State Route 56 from Athens, Ohio, to the Hocking Hills gets some traffic, but eight miles of 328 were deserted. So if you crave nice two-lane, winding pavement but don’t want the crowds, check out the Serpent’s Bones Self Touring Routes at www.serpentbones.com.

There are nice natural and historical features, including old iron furnaces and railroad tunnels. It is a cool time for a riding adventure in the Buckeye State.

I would like to thank you for the article about the various forms of distracted driving that appeared in the May edition (“Look & See: Motorcycles Are Everywhere”). This article also reminded us that we, as riders, have responsibilities as well, and I wish every rider and driver could be required to read it.

It rang true to me because nearly three years ago I barely survived having a young man on a cell phone broadside me. I know first-hand how dangerous it can be. I am still recovering but will get back in the saddle again.

I would like to add that while we frequently complain about a lack of recognition and respect from those on four wheels, we should remember to treat those four wheeled co-road users with the respect and courtesy that we expect. All too often, I see riders darting in and out of traffic as auto brake lights go on to avoid hitting the rider. I recently saw a young man on a sportbike fly between stopped cars (lane splitting is not legal here) at a traffic light and run through the red light weaving between the cars crossing the intersection. These are the actions by which non-riders judge us all.

I drive a van for work as an electrician/HVAC technician, so my riding is consolidated to after work and the weekends. I also use my truck for dump runs and hauling what I can’t on the motorcycle. But, I am still able to get 10,000-15,000 miles per year.

One thing that has helped me ride more is the addition of a trailer. Like Jim Laidella’s sidecar, written about in the June issue (“Four Wheels No More”), it gives me added carrying capacity, comparable to a trunk on a small car. I have used mine for grocery shopping, filling gas cans, camping and even picking up a Christmas tree every year.

Living in Vermont, another limiting factor to my riding is road conditions during the winter months. If there is a chance of limited traction, the bike stays in the garage. The coldest temperature that I have ridden in is -12 degrees. The right gear and heated grips helped tremendously there. Snowmobilers do it all the time—use what they use.

To get accustomed to riding in rain and cold weather, get out there and try it. Purposely take a ride in the rain even if you have nowhere to go. Get used to it. As a motorcycle safety instructor, I think it is important to show the new rider what weather they can ride in, but also explain to them the added risks involved.

The auto industry should be required to place “automatic jammers” in every new vehicle so cell phones would not work while the vehicle is moving.

Thanks Dave. The AMA closely monitors pending laws and regulations and we are not aware of any such requirements. For the AMA position statement on distracted driving, see www.americanmotorcyclist.com > Rights > AMA Position Statements.

“Motorcycle Songs” in the May issue listed a number of favorite riding tunes. Some of your fellow members have suggested a few more that fit the bill.

In addition to the classic “1952 Vincent Black Lightning” by Richard Thompson—how could we miss a song with the line, “it’s my favorite color scheme, red hair and black leather”?—you can add these: