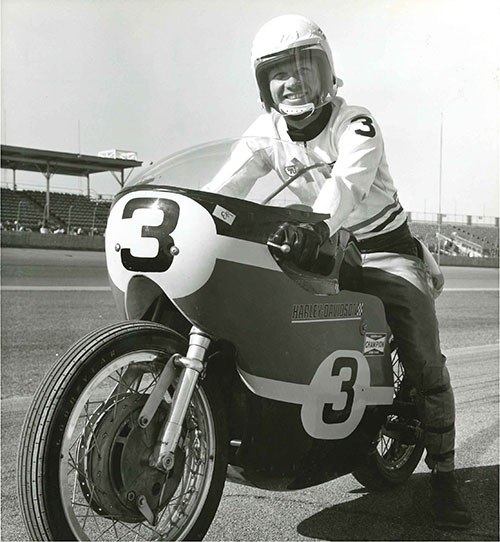 Fred Nix was born in Lawton, Okla., on July 23, 1941. In his teens, Nix began competing in local scrambles races.

Nix became serious about flat track after a trip to Santa Fe Speedway, the now legendary but defunct racing circuit in the Chicago suburb of Hinsdale, Ill. In the 1960s, Santa Fe Speedway had weekly races. Nix did well on his first trip there and promptly called his wife and told her they were moving to Chicago. With sponsorship from C.J. Harley-Davidson in Elgin, Ill., Nix launched his pro career.

Nix won the Santa Fe Speedway Series several years in a row and then cracked the top 10 twice at AMA nationals in 1965.

In May 1969, with factory support from Harley-Davidson, Nix earned his first national podium on the Elkhorn, Wis., half mile. In September, he won his first AMA national at the Sacramento Mile.

In 1967, Nix scored seven podium finishes, including wins on the half-miles in Columbus, Ohio, and on his home circuit in Oklahoma City. He finished the 1967 season third behind future Hall of Famers Gary Nixon and George Roeder.

The 1968 season was Nix’s most successful—and most frustrating. He won all four mile races, as well as the Oklahoma City Half-Mile and Santa Fe Speedway Short Track. However, Nix’s main rival, Nixon, had been more consistent.

The two Oklahoma natives were neck-and-neck for the 1968 title going into the final round at Ascot Park in Gardena, Calif.

During the race Nix got a poor start and Nixon a good one. Nix worked hard to catch up to his rival, and by mid-race the two ran wheel-to-wheel. But on that night, Nixon wasn’t to be denied. He finished fourth. Nix was seventh.

Nix came back ready to make another bid at the title in 1969. He finished poorly at Daytona but then won the mile race in Nazareth, Pa., and got his first road race victory at Loudon, N.H.

Nix never had the chance to build on that momentum. On July 18, 1969, he died in an automobile crash in Bakersfield, Calif., just a few days shy of his 29th birthday. He was survived by his wife, Carol, and a daughter, Cynthia.

Fred Nix was inducted into the AMA Motorcycle Hall of Fame in 1999.