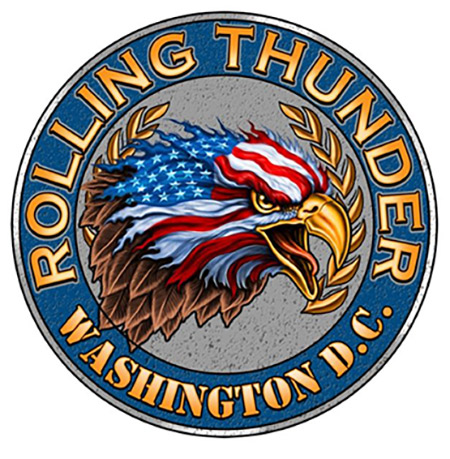 The Rolling Thunder First Amendment Demonstration Run made its final coast-to-coast trip to Washington, D.C., on Memorial Day, ending a tradition that began in 1988 as a protest to call attention to and honor U.S. military personnel who are prisoners of war or missing in action.

AMA staff members greeted the riders at the Pentagon, offering cold water and handing out freedom rider patches to AMA members and veterans.

“Though it was my fifth time attending the pre-ride activities, I rode the ride for the first time this year,” said AMA State Chapters and Volunteer Manager Marie Wuelleh. “It was a deeply moving experience, both knowing the cause at the heart of it and that it was most likely my last opportunity.”

Organizers decided in 2018 to discontinue the cross-country sojourn because of a lack of cooperation from law enforcement officials and a price tag that had climbed to more than $200,000 a year.

Beginning in 2020, Rolling Thunder will stage smaller Memorial Day events at selected sites across the country.

The event started in 1987, when Vietnam veteran Ray Manzo became troubled by accounts of POWs and MIAs and enlisted the help of fellow veterans to organize a motorcycle demonstration to bring attention to the situation.

The inaugural event in 1988 drew about 2,500 riders. That number quickly grew, and in 2019 an estimated half million motorcyclists took part.