Although she has been riding for only five years, Hayley Bell found a way in 2019 to leave her indelible imprint on the world of motorcycling.

The 28-year-old from the United Kingdom is the founder and president of global business development for the Women Riders World Relay, a movement joined by thousands of motorcyclists from 84 countries to create a “global sisterhood of inspirational women” and to demonstrate to motorcycle manufacturers and makers of riding gear that female riders are a formidable and growing market that deserves their attention.

“For her efforts to promote the motorcycle lifestyle around the world and bring together riders from all nations and backgrounds, conveying the positive aspects of motorcycling and drawing attention to the market potential of female riders, Hayley Bell is the 2019 AMA Motorcyclist of the Year,” said Maggie McNalley-Bradshaw, chair of the AMA Board of Directors, which names the AMA Motorcyclist of the Year annually. “Women riders are an important segment of the motorcycling community and they are a critical building block for the future. Hayley’s efforts not only reaffirm that sentiment, but they help carry it forward at a time when motorcycling needs new riders in the fold.”

The AMA Motorcyclist of the Year is the individual who has had the most profound impact on the world of motorcycling during the past 12 months.

“I think Hayley was the first to say out loud what many women were thinking: ‘I am part of the fastest growing market in motorcycling. I have money and I want to buy gear that fits. Cater to me,’” said Liza Miller, founder of the Re-Cycle Garage, recipient of a 2019 Friend of the AMA Award and the vice president of public relations and media for the relay. “This is why so many women jumped on board so quickly. The time is now to change the world’s perception about women riders. And Hayley is the perfect role model.” 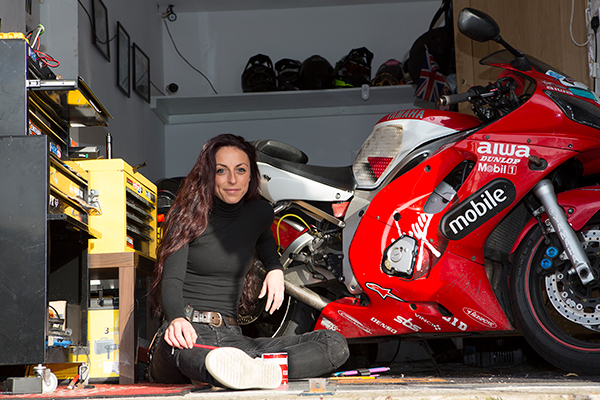 Bell grew up around motorcycles. Family members were riders. But Hayley wasn’t allowed to have a motorcycle.

But the idea of being a motorcyclist “was always in the back of my mind.”

After finishing her schooling, Bell set out traveling. One of her stops was the Isle of Man TT, which “reignited the spark,” prompting her to take the test and get a motorcycle rider’s license.

“Soon after that, my ex-boyfriend took me for a ride on his bike, and I decided I wanted one of my own,” Bell said. “It was a quick turnaround.”

In the five years since she took up motorcycling, Bell has expanded her interests within the lifestyle.

“She owns multiple bikes. She rides street, dirt and track. She wrenches on her own bikes,” Miller said. “She’s an accomplished rider who grins every time she swings a leg over a bike. Her passion is spread through everyone who meets her.

“Hayley has a smile that lights up a room, and the energy to power a city block,” Miller said.

Yet Bell deflects much of the attention that flows in her direction.

“I am not quite an interesting character or feel that people should know my story,” she said. “It’s really the opposite. I am a communicator, but just a regular biker. There is nothing significant about me. I try to communicate the stories of other people around the world.” 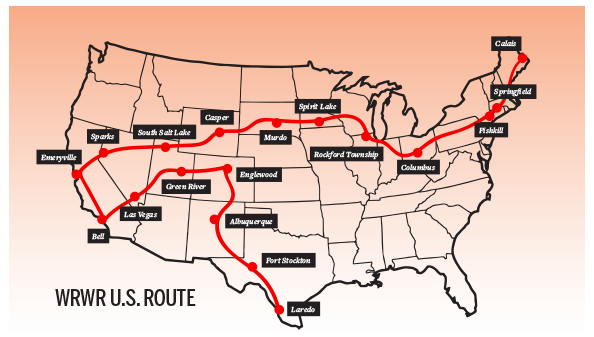 That desire to communicate the stories of others is the impetus behind the Women Riders World Relay.

“The real reason the WRWR started was that I wanted to show people what it is to be a female biker, how many of us there are, the vastness of the market,” Bell said. “And I wanted those stories to inspire other women.”

“We had so many women who said, ‘I can’t do this,’ but then they did it,” Bell said. “The other riders were there to bond, build trust and give them a kick in the ass sometimes.

“For some of these women, this is the biggest thing they have done in their lives,” she said. “It’s the longest, coldest or the wettest ride they’ve ever taken. It’s the first time they’ve ridden with a partner or in a group or alone. This relay has provided firsts for so many.”

Participants have children, grandchildren or even great grandchildren, “and they are still riding,” Bell said. Riders ranged in age from 16 to 80.

“We have unleashed a collection of inspiring stories,” she said.

The participants carried the relay baton for a leg of the journey through their countries, then passed it along to the next group of riders.

Some rode through snow, at high altitudes—where altitude sickness can take a toll—and in temperatures below zero.

Bell related the story of one woman who was in tears 150 miles into a 500-mile day. She was on her phone, calling her partner to pick her up. She was ready to pack it in.

Bell did not try to talk the woman out of her decision. Instead she delivered a simple message

“You’ll regret it if you quit now,” Bell told the woman.

“She battled through the rest of that day,” Bell said. “At the end, she said, ‘Thank you very much. I’ve achieved something. That was not an easy ride.’

“Most people wouldn’t do 10 minutes in some of this weather, let alone 500 miles,” Bell said.

One goal of the Women Riders World Relay mission was to catch the attention of motorcycle manufacturers and the makers of riding gear.

The relay website boldly declares: “My aim is to wow the industry into realizing the global market for women in motorsports and to inspire women worldwide. Going into motorcycle stores and seeing a lack of choice, combined with stereotypical pink and being told, ‘There just isn’t the market for women,’ highlighted to me just one small element of a much bigger picture around women in motorsports. I want to show the industry the force behind the market that is so blindly overlooked. I am doing this because women bikers can make this happen.”

Among the 23 companies that supported the ride was Indian Motorcycles, which provided motorcycles for some of the participants.

Bell said some companies really stepped up with sponsorships and support for the relay, while others seemed disinterested.

Still, Bell said, the positive effects of the ride are becoming evident.

“Women are creating their own groups,” she said. “They are bringing more people in. The more bikes we have on the road, the more the industry will pay attention. If businesses want to expand the industry, we want to help.”

“The original goal was to get the attention of the industry, since women are so often overlooked when it comes to gear options,” Miller said. “But it has become much more than that. We became a network of women riders who were sharing information and also inspiring each other to become better riders.”

Bell was working her “8-to-4 office job,” but wanted to go traveling.

“I realized that I had no communication with other women riders, and no means to find them,” she said. “We are a minority within a minority—a hidden community.”

Bell said women who ride must battle the common misperceptions that all motorcyclists face. But they also suffer from a lack of coverage in the media and a lack of interest within the industry.

Bell determined that the Women Riders World Relay “would become the eyeopener,” demonstrating to the world that female riders “are exactly equal to other riders.”

Along the way, the relay has drawn support and participation from male riders, as well.

“We accept, support and welcome men within our community,” Bell said. “We support those who support us. We are bikers, and that’s all we want to be recognized as.”

The relay brought together women from diverse cultures and bridged political differences, even across national borders, Bell said.

“Everyone was very respectful,” she said. “People crossed borders to collect the baton, even in politically warring countries. People became friends with others they may have never met otherwise.

“It was a fantastic experience to be culturally awakened to the different countries and the different styles of riding,” Bell said. “I needed to get that world-look perspective. I needed to know there were women like this out there.”

After January visits to Zimbabwe, Mozambique, Malawi, Tanzania, Kenya, Oman and the United Arab Emirates, the Women Riders World Relay will be complete.

There will be a ceremony in the United Kingdom to commemorate the event.

The rides in 2019 were about “building awareness and putting women’s motorcycling in the spotlight,” she said. “In 2020, we want to physically improve women’s riding and demonstrate what that means. This is a wholesome activity that builds community.

“We want to ensure that riders are helping each other, sharing information,” Bell said. “We want women to learn how to set up engines. We want them to try new forms of riding. We want to enhance the support network and assist those who haven’t been supported in the proper way.

“Riding provides a relief from the normal world and an exhilaration that is hard to match,” Bell said. “We want to share that experience with as many people as possible.” 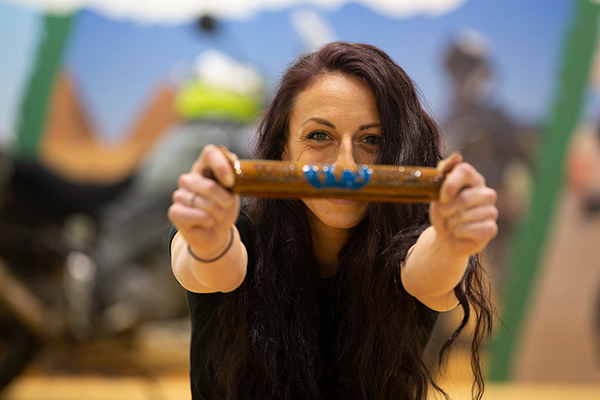 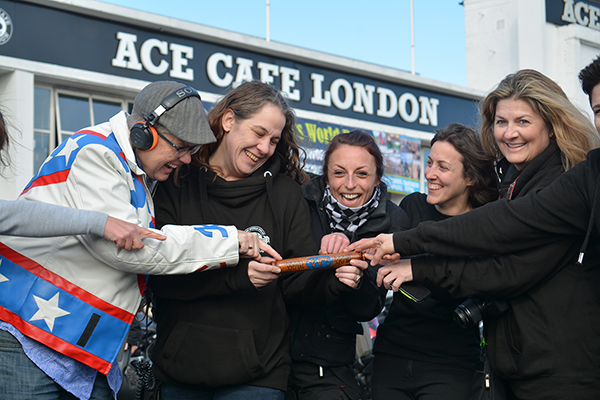 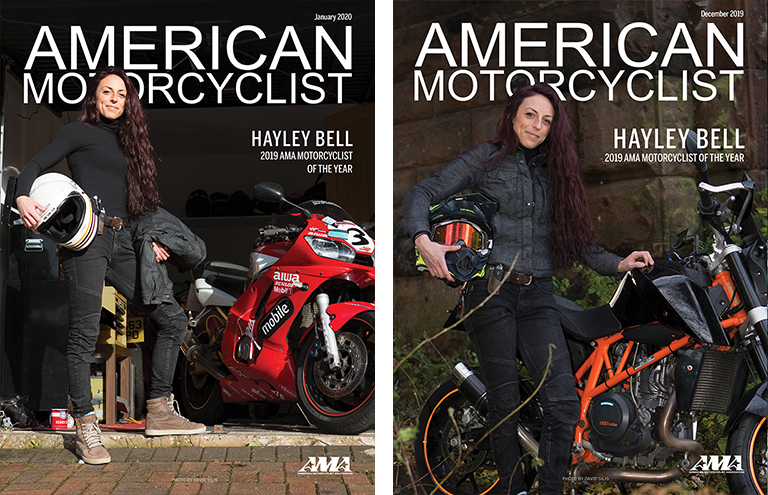