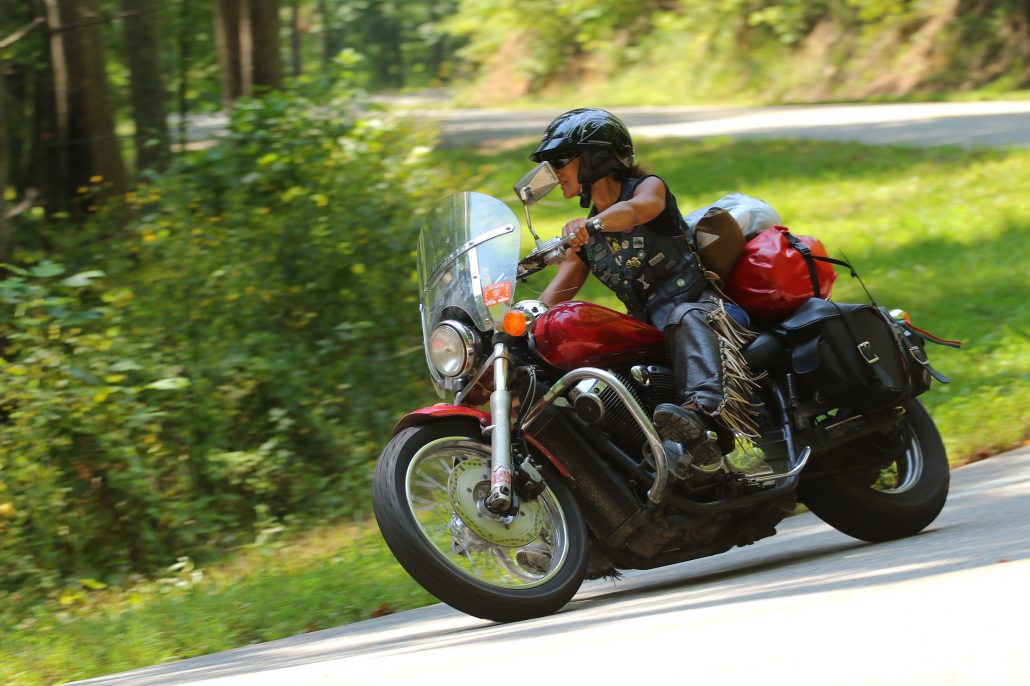 Griffin rides “The Tail of the Dragon.”

Maureen Griffin has found a way to blend her passion for music with her love of motorcycling.

“I’ve been singing and dancing since I popped out of the womb,” she said. “It’s all I’ve ever wanted to do.”

“Eventually, it became apparent that I had an operatic voice, and I studied singing privately while I was in college,” she said. “When I was 33, I got my master’s in theatre arts and became a professional actress.”

Griffin has performed “off and off-off Broadway,” in her words.

“I was the oldest tap dancer in the Off-Broadway production of ‘Give My Regards to Broadway,’ being 10 to 15 years older than the rest of the cast,” she said. “No one knew. Besides, I felt 17.”

Although Griffin refers to herself as a “late bloomer” regarding her acting career, motorcycling came along even later in her life.

“When I met my husband, Curtis Damone, in September 2007, I never dreamed of riding a motorcycle. I thought people who rode bikes were crazy,” she said. “However, a few dates later, I found myself sitting on a small cushion stuck to the fender of an Indian Spirit, holding on for dear life as we rode no more than 30 mph to a nearby restaurant.  I kept my eyes closed and buried my head in his leather vest.”

But after a ride to the beach later that evening, she was hooked.

“Not just hooked,” she said. “I soon decided I wanted to ride my own.”

She was 52 when she took the Motorcycle Safety Foundation BasicRider Course. She has been riding ever since.

“When we got married in 2015, we took a six-week cross-country honeymoon on our bikes, traveling 10,000 miles from Long Island to Niagara Falls, and then on to Michigan’s Sleeping Bear Dunes, Milwaukee and the Harley museum, through Minnesota farmlands to Sturgis for the 75th anniversary rally, throughout Wyoming, Utah, Arizona—the Grand Canyon—then U.S. Route 66, Cadillac Ranch, the Dragon’s Tail and the Grand Ole Opry—which became a song and music video, using pictures from that trip,” Griffin said.

It was on a 2013 motorcycle ride that Griffin began to mix riding and music.

“For whatever reason, no matter what I sang that day, I couldn’t get one particular song out of my head, ‘Thank God I’m a Country Boy,’” she said. “Not knowing all the words, I started making up my own lyrics. I wrote a verse in between each gas stop, and by the time we got to Myrtle Beach, I had almost an entire song.

“That’s how ‘Thank God I’m a Biker Girl’ was born … and so was my music career.”

Coming to motorcycling from the world of musical theater, Griffin brought an unusual perspective.

“I saw both sides: the general public view of bikers as bad guys, and the inside view of bikers as some of the most decent human beings you’ll ever want to know,” she said. “I wanted to show the world that bikers are not the bad guys that people imagine.

“There is a true story behind every song,” Griffin explained. “And Curtis is a huge influence on my songs, helping me refine lyrics and telling me when he just plain doesn’t like what I’ve written.”

During a 2017 interview about her music, Griffin mentioned she was a late bloomer, learning to ride in her 50s and launching a recording career at 59.

The interviewer connected her with Marleen Schuss, who runs the Ms. Senior America Pageant.

Griffin was among the dozen selected to compete. And she became Ms. New York Senior America 2018.

Griffin summed up her approach to life this way:

“Being young is in your heart, and it doesn’t matter how old you are. Being young is pursuing the dreams that God put in your heart, because He put them there for a reason. Sometimes those dreams can seem a little crazy. In my 50s, I learned how to ride a motorcycle, and in my 60s I’m producing music. The most important thing to staying young is to keep a sense of humor, and put as much fun as possible into every single day. And that makes me look forward to being a very young 90-year-old. I pray I may be blessed enough to still be riding then, too.”