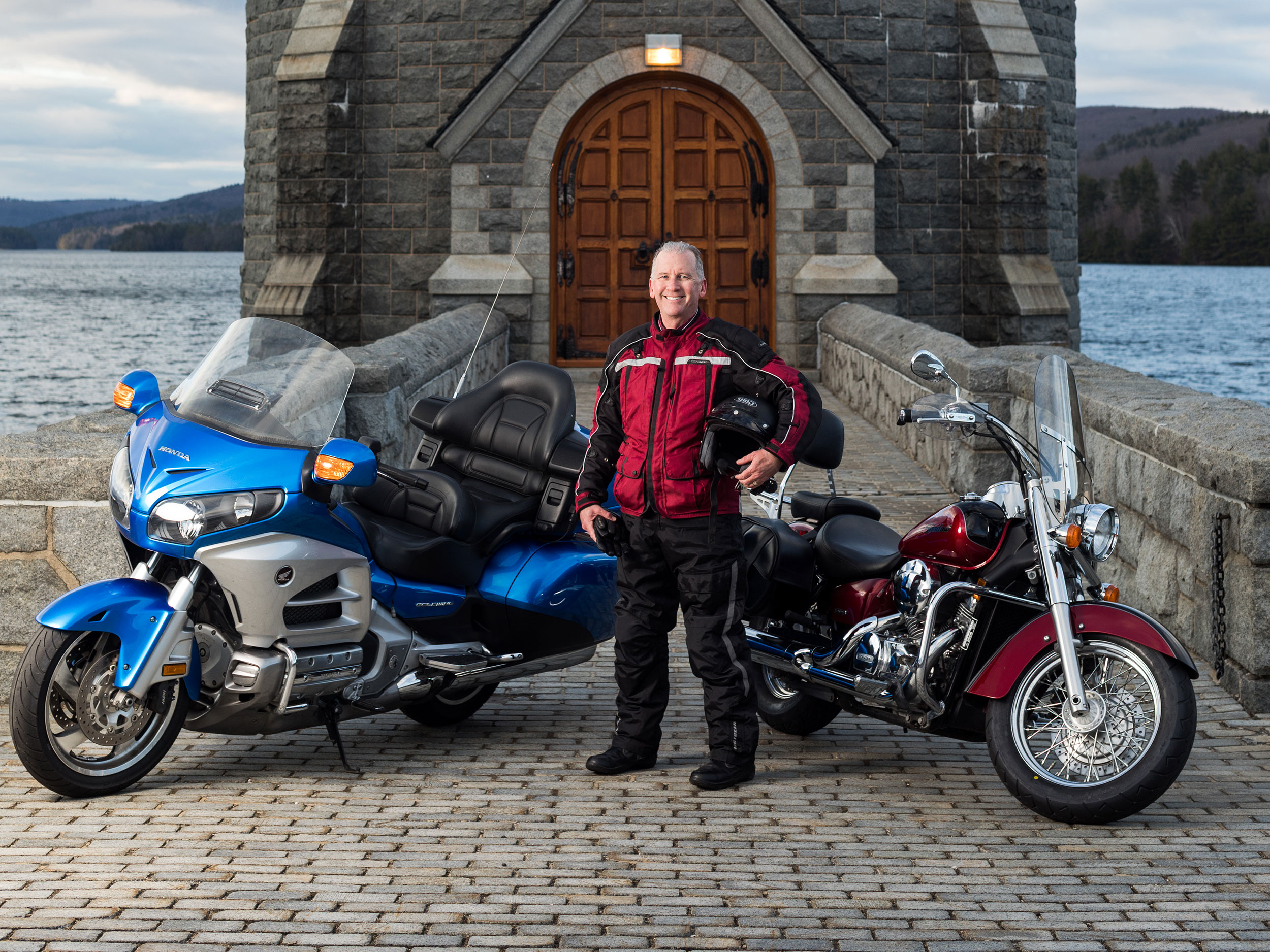 Joel Lund says the motorcycle-only lifestyle has allowed him to more fully enjoy the scenic beauty and twisty roads of his western Massachusetts home region. Photo By Coppola Photography

A lot of motorcyclists say they’d love to be able to ride all the time. However, relatively few of us actually make the leap, relying on our bikes as the primary, or only, means of transportation.

The AMA asked its members on social media and in American Motorcyclist who among you has made the switch to full-time on two wheels.

Here are four stories of those who responded.

Ride Sunday 2018, the International Day of Riding for a Cause, is scheduled for June 3.

Supported by Harley-Davidson Motorcycles, REV’IT!, Triumph Motorcycles and Royal Enfield, Ride Sunday is an outreach effort to unite the global motorcycling community. Hundreds of thousands of riders around the world are expected to participate, and organizers hope for more than $1 million in donations for more than 50 charity beneficiaries.

Ride Sunday is open to all motorcyclists and scooter riders, regardless of bike style or riding preference, be it on-road or off-road. Any rider with a motor and two wheels is encouraged to participate and raise funds for the charity of their choice by either joining a certified dealer ride, hosting their own ride or joining an existing group ride via www.ridesunday.com.

“With the right gear, 28 degrees is my cutoff temperature,” he said. “Severe weather is an obstacle. You have to ride in everything here. I can’t ride in the real severe winter months in New England.”

Lund’s motorcycle-only life began when his three children started to drive “and we couldn’t share the car.”

He said that lack of funds for an extra car was a significant factor, “along with the fact I would normally ride all the time anyway during spring, summer and fall.”

One of his favorite commutes came with the job he held from 2013 through 2016, when he rode daily from Westfield to Colrain, Mass., which is near the Vermont state line.

“The ride was on roads most motorcyclists dream of for a weekend getaway,” he said. “I was blessed with the opportunity to ride these roads every day. The simplest ride was State Route 112 all the way to Huntington, Mass., and then State Route 20 east to Westfield.

“This road is one of many listed scenic byway roads recognized by the state,” he said. “It crosses the Deerfield River in the small town of Shelburne Falls, where Robert Downy Jr. came to film ‘The Judge.’”

Lund said daily motorcycle use comes with some challenges.

“First, for some of us, the ride must be enjoyable to make it worthwhile.” he said. “A good motorcycling friend of mine rarely rides to work, because he has a boring stop-and-go commute with no interesting options for rerouting.

“The best daily motorcycle commute has enough speed or twisties or panoramic views and would, hopefully, not just be a stop-and-go situation,” he said.

The big advantages to motorcycles are lower insurance, maintenance and repair costs, he said.

And, “My hobby becomes my transportation.” 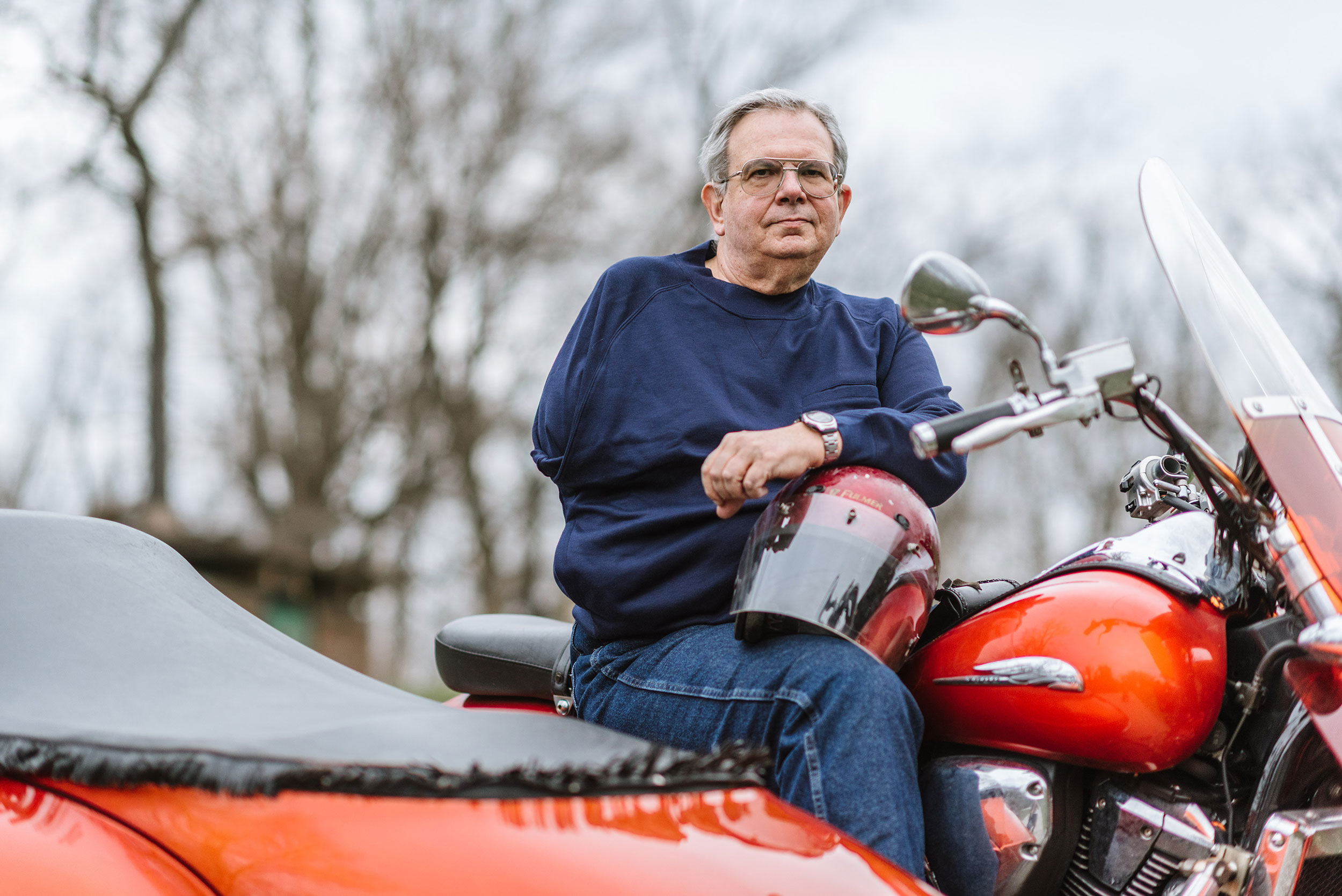 Jim Laidella remains devoted to the motorcycle-only lifestyle, despite losing his right arm in a motorcycle accident. Jim is pictured with his modified, sidecar-equipped Honda VTX1800. Photo By Seth Williams

Jim Laidella, 61, of South Park, Pa., has never been behind the wheel of a car. His motorcycling experience includes rides with two wheels or two wheels and a sidecar.

“Motorcycles have been my only means of transportation since I first received my motorcycle-only driver’s license at the age of 16 in 1973,” he said. “I’ve visited all of the lower 48 states at least once, crossed Canada a few times and even completed the USA Four Corners Tour.”

And Laidella stuck with motorcycles, even after a mishap resulted in a severe injury.

“A loose bolt on a sidecar mount cost me a right arm in 1991,” he explained. “I’ve had to buy bikes with integrated brakes and transfer the throttle to the left handlebar since then.”

Laidella’s current bike is a Honda VTX1800 with a Champion sidecar.

“It came standard with integrated brakes, so the only modification is the throttle,” he says. “It’s on the left handlebar and turns backward as I let out the clutch.”

For Laidella, motorcycling makes sense for its simplicity, the reduced purchase price and savings over cars in maintenance and insurance costs.

The drawbacks of a motorcycle-only life include severe weather and increased vulnerability in crashes, he said.

“Filling your sidecar with gravel and riding 13 miles to and from work in a foot of snow gets old after a few years,” he explained.

Laidella acknowledged that relying solely on motorcycles may not be the best choice for everyone.

“I recommend everyone choose their own lifestyle,” he said. 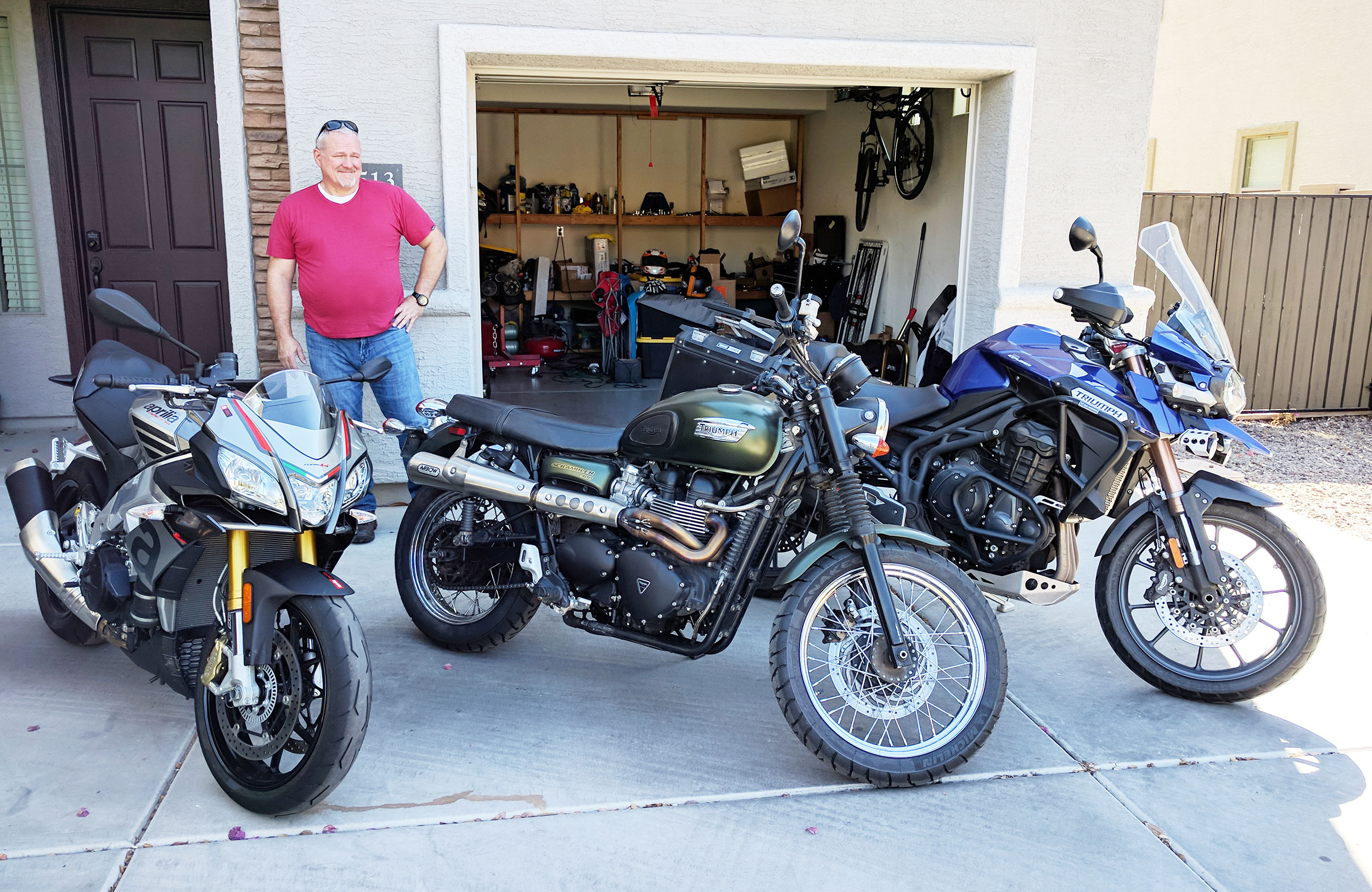 Daniel Baldwin, 55, of Gilbert, Ariz., has adopted motorcycle-only transportation twice in his life.

His first bike was a 1979 Yamaha XS Eleven Special.

“I rode it to the DMV office to take the rider test for my license the day after I got it in 1982,” he said.

A few months after Baldwin bought the Yamaha, his Chevy Chevelle “gave up the ghost.”

“I realized that I didn’t really need a car,” he said. “I was motorcycle-only for the next three years. Then, one day in 1985, I was tempted by a Mustang GT. I started splitting time with cars and bikes. This first stint proved an important reminder to me later.”

That “later” came in 2005, when Baldwin made his second transition to the motorcycle-only life.

“I picked up a used BMW K75,” he said. “I lived in North Carolina at the time, and my only rule for not riding was if the temperature was at or below freezing and there was precipitation.

“In 2009, I bought a Ducati ST4. Around that time, my son was driving, so I used the motorcycle for all my transportation needs. I sold the ST4 when we moved to Arizona in 2011. Shortly after arriving, I found a Ducati ST4s which was my sole transportation.”

“I call it the SUV of motorcycles,” he explained. “It goes anywhere I need and can carry all of my stuff. It can do grocery runs and vacation trips. It’s also comfortable for two-up riding, which was great when I was giving my daughter a ride to school every day.”

Opting for two wheels instead of four was an easy decision for Baldwin.

“First and foremost, I really would rather ride than drive anywhere I go,” he said. “I love the feeling I get on a motorcycle.

“When our family was down to one car, I realized that I didn’t really need to buy a car for myself. I knew from my college days that I could get by without one,” he continued. “So, it was an easy choice to make.

“The main reason is that I figure I only have a limited number of days to ride in a lifetime,” he said. “I’ve missed out on too many already. I don’t want to miss any more. My life is happier when I ride, so why not ride all the time?” 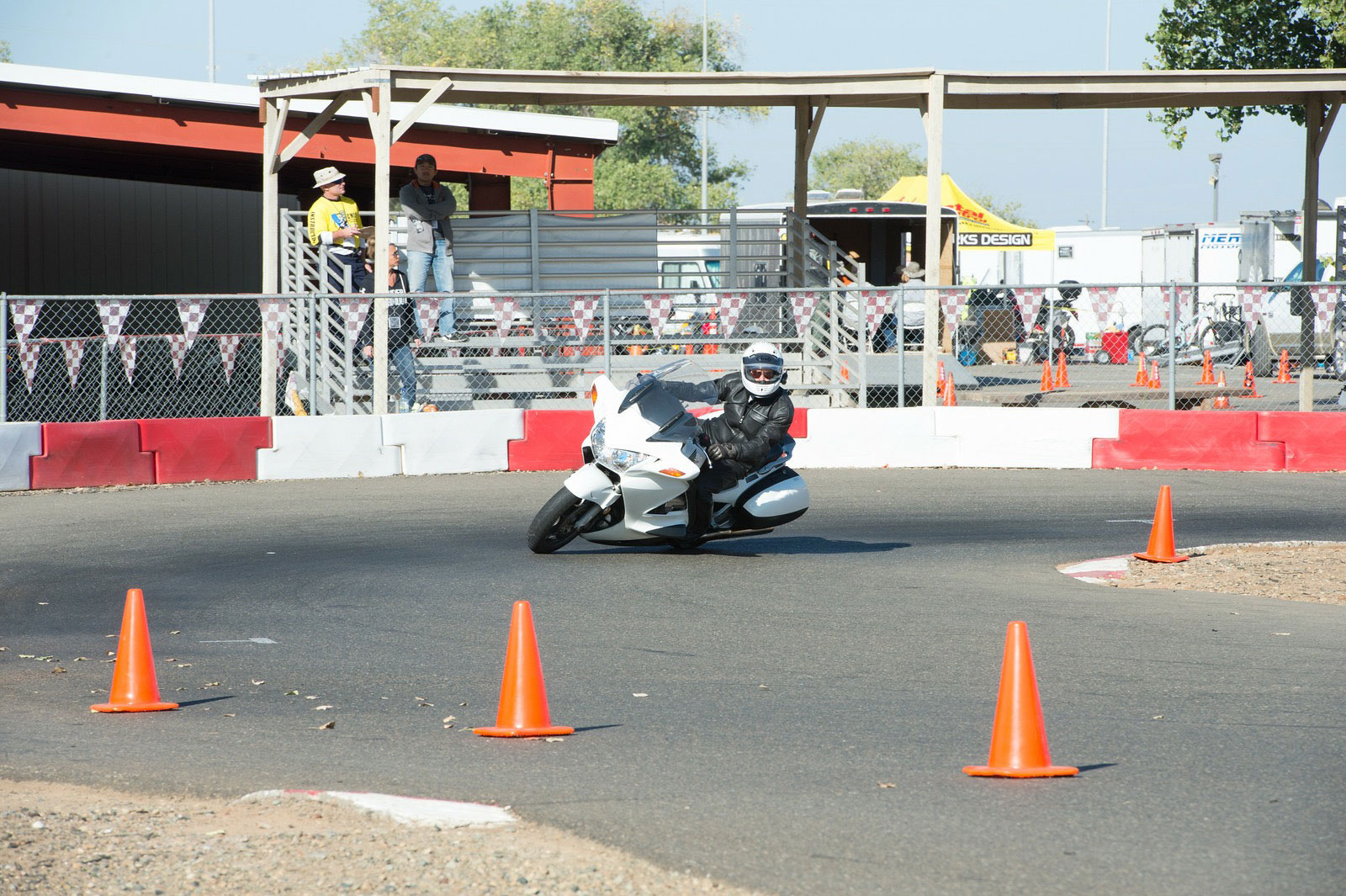 Scott D. Nelson’s job as a motorcycle safety instructor has made the motorcycle-only lifestyle “tax-friendly.”

Living What He Teaches

While his family owns a car “for the wife and kids,” Scott Nelson, 53, of Alameda, Calif., has been motorcycle-only for 22 years.

“Around 1995, I got out of the U.S. Army, returned to Minnesota, then moved to California to teach motorcycle safety year-round and study massage therapy,” he said. “Bay Area traffic, amazing California roads, fuel economy and improved parking opportunities convinced me that the motorcycle was all I needed.”

Nelson also found his bikes “tax-friendly.” As a motorcycle safety instructor, he was able to write off motorcycle expenses, he said.

“Motorcycles are the cheapest street-legal high-performance vehicle,” he said. “They are practical, plus more fun than cars.”

There may be a car in Nelson’s future, if it is electric or a hybrid.

Nelson said he would recommend the two-wheeled-only lifestyle to some: “The adventurous, definitely yes! It’s not for everyone.”

Those who may not want to try it: “Anyone who says ‘Whew! That was a close one,’ on a daily basis.”

Do you have some practical tips for riding more and driving less? Let us know at submissions@ama-cycle.org.

Advice From The Riders

June 18 marks the 27th International Motorcycle and Scooter Ride to Work Day, an effort begun to encourage motorcyclists to use their bikes for everyday transportation, to illustrate the benefits of powered two-wheelers and to spark conversation about motorcycling among non-riders.

On the third Monday of June, riders around the world will commute to work and/or use their motorcycles or scooters for errands.

International Motorcycle and Scooter Ride to Work Day is a 501(c)(4) nonprofit organization, advocating and supporting the use of motorcycles and scooters for transportation and providing information about everyday utility riding to the public. For more information, visit www.ridetowork.org.

Q: Under what circumstances would someone be better off with just a bike?

Baldwin: “If I lived someplace where parking is such a nightmare, like major urban centers, I wouldn’t even think twice about being motorcycle only. If your passion is riding a motorcycle, then definitely consider it. If you love to ride, and can’t afford both a motorcycle and a car, choose the motorcycle.”

Laidella: “Someone who can commute via public transportation and who lives within walking distance of basic necessities.”

Lund: “You would be better off with just a bike where there are crowded roads and a good riding climate.”

Q. Is there someone you would not recommend this for?

Baldwin: “If helmet hair is a major concern, perhaps this isn’t for you. If you regularly need to carry more than will fit on a motorcycle, then maybe consider a side car. Are conditions conducive to riding? I wouldn’t want to ride in ice or snow on a regular basis. Rain can be dealt with so long as you have good gear. I keep a spare set of clothes at the office, just in case.”

Laidella: “People who have families depending on them for transportation.”

Lund: “It’s relative. There are sacrifices for extreme heat, cold and rain. And there is minimal capacity to haul items.”

Q: What else would you suggest?

Baldwin: “You don’t have to jump in all at once. Just start riding more. Find excuses to ride. Decide to take the motorcycle instead of the car for an entire week everywhere you go. Then do it for a month. Before you know it, you’ll be riding full time.” 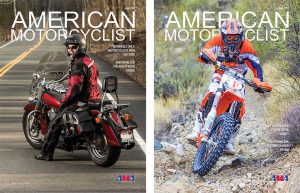